The next big show on COLORS is obviously the Abhishek Bachchan hosted National Bingo Night which is to launch on 23rd January. 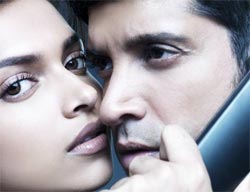 Featured Video
While the opening episode of the show will have the son and father duo of Abhishek and Big B sharing the same stage, talks are on with many big names of Bollywood.

As of now, Bigg Boss 3 winner Vindoo Dara Singh and finalist Pravesh Rana have shot for their episode.

According to our source, "The next big names to shoot for Bingo happen to be Farhan Akhtar and Deepika Padukone. It is heard that the two are shooting today for the episode. They will also be promoting their upcoming flick Karthik Calling, which is set for release this year".

"It is also heard that the channel and production house are trying to get Shahrukh Khan and Kajol for an episode. "Though nothing has been confirmed on this, talks are on with SRK and Kajol. If they give their nod, they will be seen promoting their movie My Name is Khan", adds our source.

SurfIndia 12 years ago Hope the host will also become celebrity with this show. .. .he he he he

+ 8
12 years ago will there ever be regular people on this show?
all reality shows are after celebs these days?? what's the reality in them?? they act for the entire episode and dance chat.

n i hope SRK-Kajol come on the show too!