His walk, his talk, his gestures, his gait….everything is different yet unique. He is little unlike us, little disoriented, little perplexed, confident yet not confident…. 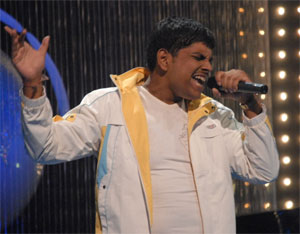 Featured Video
Little unusual for a 22yr old guy…that is Debojeet Dutta for you… the only contestant from Bengal in SaReGaMaPa Challenge 2009 who has maintained consistency in his performances throughout and is here to give a tough competition to the rest.

Debu as fondly called by his friends and folks has managed to create ripples in the contest and has maintained his no. 1 status constantly. He is actually a slow child, quiet contrary to the fact that both his parents are well known scientists. He is been taken far and wide for treatment but no cure has given him the certification of what we call normal. His parents say, “There is nothing wrong with him….its just that he is different… we have no complaints. Whatever he is, he has made us proud in every way ..like any other normal son…”

Ace musicians Pritam Chakroborty and Shankar Mahadevan have already promised him playback. Crooner Himesh was so touched by his performance that he went up to the stage and took his autograph.

Quite rightly so … he is slow but steady, and in the heady race of life he is bound to leave the other normal mortals far behind…

+ 5
14 years ago i might be wrong but i dont think he is much versatile singer...

+ 5
14 years ago I love the way he surrounds himself in the song he's singing. Its amazing.
His dancing is pretty good to =P lol

14 years ago He is overrated.I dont like his voice.Shashi Suman was much better than him

14 years ago debojit's performances always bring tears......there are people who are 'normal' who can't sing as well as him