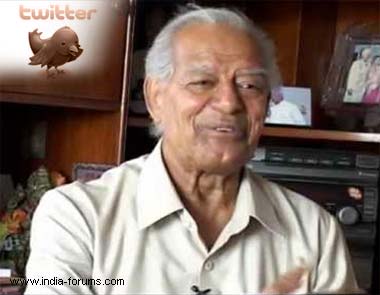 Wrestler-turned-actor Dara Singh's demise has been the most talked about topic on Twitter Thursday and it featured among top five trends on the microblogging site.

As the nation bid a tearful adieu to Dara Singh, who died at his home in Mumbai following a brief illness, his fans took to Twitter to express their grief at the demise of their "childhood" hero.

The late actor was among the top five trends on microblogging site Twitter. From being Lord Hanuman in epic TV series "Ramayana" to fun-loving grandfather in "Hadh Kar Di", Dara Singh's fans remembered the actor for his various performances.

Here's what they had to say:

Jigger Shah: RIP Dara Singh Randhawa! you were my Hanuman, (my) hero in my childhood days! you will be truly missed! My condolences to his family!

Arpit Agarwal: How is nobody remembering 'Hadh Kar Di' by Sachin Pilgaonkar starring Dara Singh? It was one of the best family sitcoms on TV. RIP Dara Singh.

Rajneesh Chaturvedi: RIP Dara Singh. Your legend will continue to amaze all of us and generations to come with wide eyed splendour...

Foud Farooq: RIP Dara Singh. You are one actor among the oldies that I have always loved to watch.

KJS Arora: Former Wrestler and film actor Dara Singh dies...As a kid, I saw him in the ring many a times...A hero of my generation RIP, Dara Singh.

Pratik Sahu: As a kid I use to think that he was the REAL Hanuman. The only man on Indian TV who could actually be a Superhero. RIP Dara Singhji.

Sugandh Swami: Strength falls apart but you will always be remembered for your gentle persona...

Harsh John: Dara Singhji passed away this morning. A great Indian and one of the finest humans...An entire era of his celebrated presence gone!

'Billions' Renewed For Season 6
5 hours ago

“Prabhas’ passion for cinema only drives him,” says Radhe ...
10 hours ago