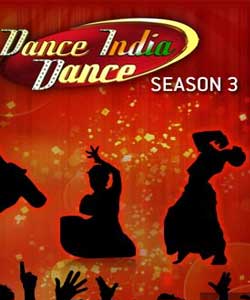 Even after the successful run of two seasons, seems like people have not had enough of the biggest dance reality show ever, Dance India Dance. And no wonder Zee TV is all geared up to bring season 3 of the show.

Yes, you guys heard it right.

After Star Ya Rockstar, Zee TV has planned to bring the thunderous, rhythmic and the well adored dance reality show, Dance India Dance and that too with the same able team.

A source says, "Season 3 of Dance India Dance will be produced by Frames Production and this will be the first time the Production house will be associated with the show."

We also hear that the trio, Terence Lewis, Remo D' Souza and Geeta Kapur, have been approached to be the judges and Mitun Da (Mithun Chakraborty) to be the Grand Master, for this season as well. Jay Bhanushali and Saumya Tondon have been finalized as the hosts for the show.

We contacted Terece Lewis and he said, 'Yes, I have been approached for the show and I am very excited about it. Fingers are crossed; hopefully all three of us will be back."

Well, all dancers out there put on your dancing shoes to groove on the best tunes….

gaga00 8 years ago I AM SO GLAD THEY ARE BACK TOGETHER.. I DIDNT WATCH DID2 BC TERRANCE, REMO AND SAUMYA WERE MISSING.. COMEON THEY ARE THE FUN PEOPLE.. I LIKE TERRANCE NOTING THE MINOR DETAILS AND TAKING HIS NOTES AND THE OTHER TWO MAKING FUN OF HIM...

mehak.S 8 years ago I am so happy after seeing the article and so excited that the show is bak with the original hosts jay&saumya and the trio judges and grandmaster...this will be the best season of DID..really looking forward to the show and all the fun that is brought in it by the anchor Jay..he is the charm of the show..my first reason to watch the show is him only..he is soo funny and sportive despite of all the pranks played on him.. i say jay pls play some pranks on the ur co host n judges this time ..lol

love_abhiya1 8 years ago yuppyyy so so so happy... Remo,Geeta nd Terrence back together.. i didnt watch the DID doubles for the reason tht all three were not together but this is sth i always had been waiting for...
super excited..

sweet_angel27 8 years ago I'll watch it, if the first season judges are back! :)

BIackSwan 8 years ago ooohhh la la laaa i cant wait to see my fav 3 idiots back on screen; remo/terrance/jai

DID is baaack ppl!!!

shine_bright 8 years ago YES!
FINALLY. The MEGIIC is back :DD

-X-NeeNee-X- 8 years ago Yayy! Back with the original three! Though TBH I would have liked Manish Paul to be back as the anchor too :( He will be missed incredibly! But can't wait for the show to start! :D

shaina1 8 years ago i can't wait to see the three judges back together along with jai and soumya. first season was definitely the best. wonder if they can live up to that.

desicrowd 8 years ago Nice to see all the three judges back together...

"She Has To Send Me a Complaint After Which I Will Look Into ...
3 hours ago

Why Wasn't Nana Patekar Given Support During MeToo ...
3 hours ago

"Parineet Didn't Want to Work with a TV Actor": Anurag ...
4 hours ago