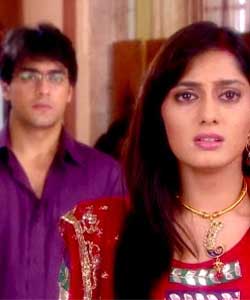 It has been a troubled relationship for Daksh (Gaurav S Bajaj) and Naina (Parvati Vaze) since they got married against the consent of their families. As if the existing tension was not enough for the couple, a new set of tension is awaiting them.

A source says, "The couple is already undergoing a lot of tension after they have shifted to Daksh's house and Naina is trying to make everything alright between Daksh and his family. But in the coming episodes, the viewers will see tension erupting between Naina and Daksh."

Further revealing on the track, the source says, "In the upcoming track Daksh will feel neglected as Naina is busy mending relations between her and her mother-in-law. It will be a serious phase for the couple wherein their wedding will be put on a pedestal."

We contacted Parvati Vaze and she said, "There will be certain things happening in the show that is not necessarily good for Naina and Daksh."

Will Naina lose one relation in the process of mending the other?

Let us wait and watch…

rahul677 8 years ago ths is nice serial..SSBN..started watching ..i like naina

kumar98 8 years ago Don't let anythn between thm, let them both be happy!! Why can't just the writers let them be happy

Seema1987 8 years ago SSBN is very low ranking..jst do sumthing..please change the storyline like befr

rifgaa 8 years ago i wish ths show starplus coud repeat evening or late nyt..i cant watch cox i hve to go college dat tyme and i miss the show most of tyme..i watch from youtube only