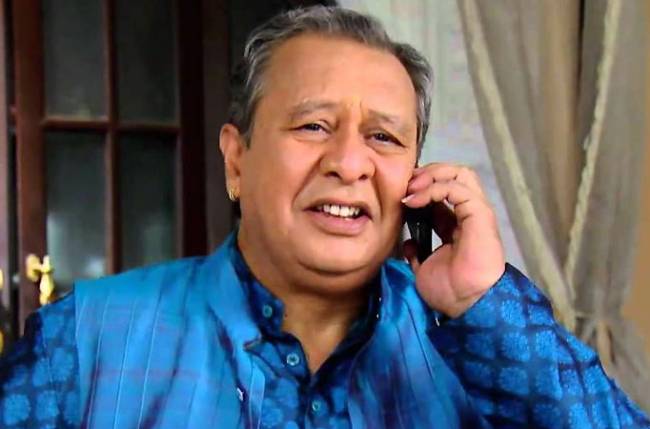 Director's Kut Productions' popular show, Yeh Rishta Kya Kehlata Hai on Star Plus, has left no stone unturned to amuse the viewers with its drama and interesting twists.

The latest track is revolving around Muskaan's (Zarina Roshan Khan) marriage preparations. As trouble always knocks the doors of Singhania family, whenever they gear up for a happy occasion, soon a shocking news will blow up everyone in the family.

Our source informs us, "Daddaji (Abhijeet Lehri), who remained away from the show for quite sometime now will shoot for his death sequence on the show. Abhijeet feels that his character is not getting prominence anymore and is fading away. Instead of stretching his role unnecessarily, the makers have decided to end his character before leap. Thus, he will be shown dead in the show and will not be seen after 10 years on the show. The sequence is yet to be shot."

After Gayatri (Sonali Verma), Daddaji will bid adieu to the show.

We tried contacting Abhijeet Lehiri, but he remained unavailable for the comments.

akshara456 6 years ago Hina Khan, you are a damn good actor..you rocked as Akshara & will rock in this emotional tract too..Keep going & we love you & keep supporting you..no effect on us by some fans disliking our comments..

6 years ago Hina Khan, You are a mind -blowing performer..You rock & will rock as Akshara..Newbies-guys stop bothering about avnimalik12 , needblessings disliking comments..we know whom fans they are..their disliking remarks on our comments won't affect us ..showing immaturity with it..

+ 5
6 years ago gonna miss him, but its a realistic decision as he is rarely seen these days in show plus after the leap, they will then concentrate on grown up kids. Anyways, I liked the work of both the actors who played Daddaji, they played really well.

6 years ago avnimalik12--You need to grow up too..if you are n't effected if your favorite actor is criticized by others then why press dislike button on their comments..this means you seriously affected..my friends are more balanced than you..you can't change your opinion for your favorite actor Karan mehra too..totally super over acting as naitik , no expressions seen on his face,..no class at all..Whole world knows who is better among main leads..We too are entitled to write our opinions like you...No need of your opinion ..Grow up & show some maturity..seems kiddish behavior in my eyes..Hina Khan , you are & will always be a great star & as Akshara you are brilliant..

avnimallik12 6 years ago Unlike some people, I do not get offended if somebody criticizes my favorite stars, everybody is entitled to their own opinion, and if you cant bear any criticism or difference in opinion, then be mature and learn too! This whole world doesnt revolve you or Hina Khan. and no matter what comments you pass, my opinion wont change. Grow up and get a life!

nisha21 6 years ago Don't know why fans are after Hina Khan in this article?..What she has done?..If someone like other actors & work this doesn't mean we should criticize other actor if not favorite..How do you feel if someone criticize your favorite actors?..Hina Khan you are stupendous as Akshara & play your part absolutely well..watch this show more becoz of you & the way you act as Akshara .Keep rocking.

nupurchopra 6 years ago Hina Khan, you have played your role of Akshara with great command..especially in emotional scenes you are super -duper best..Always love & support you irreversibly.

6 years ago Hina Khan, you are a super talent..you have given everything to this show..you performed your role so beautifully & make the audience glued to t.v. to see your phenomenal acting as Akshara..Every actor does whatever written in the scripts but most important is How an actor deliver the script?..Hina Khan damn good in portraying all the emotions & expressions as Akshara perfectly..Keep it up Hina di..We true fans keep supporting you always & we know your caliber..love you.

6 years ago Hina Khan, you are a natural talent..your acting as Akshara is really a treat to watch..The way you perform emotional scenes, the way you said mera duggu everything so adorable & great. & your smile is really very beautiful..your true fans know the worth of your acting talent..love you di.