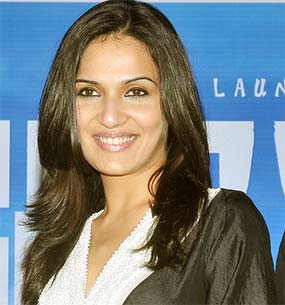 Soundarya Rajnikanth, who has directed her father and superstar Rajinikanth in forthcoming Tamil period-drama "Kochadaiiyaan", Friday said the latter was not at ease while shooting romantic scenes with his co-star Deepika Padukone.

"I guess it was because I was around and calling action and cut, dad felt very awkward to shoot some romantic scenes," said Soundarya who would love to direct her father again.

"God willing if I get an opportunity, I would love to direct dad again. I feel blessed to have directed him. I would be really happy to work with him again," Soundarya told reporters here announcing the film's partnership with Karbonn Mobiles.

The handsets will feature Rajinikanth's signature on the back cover.

"Kochadaiiyaan", which has been in the making for nearly two years, is touted to be the first Indian film to be made using motion-capture technology.

Soundarya said her father was very professional on the sets.

"As a father he's very caring and protective, but as an actor he's highly professional. I felt it throughout the film's shooting and it was very evident in most scenes," she said.

While it was reported that the film will hit the screens April, Soundarya reiterated that she will confirm the release date soon.

"Due to the technical process involved in the making of the film, we missed earlier release dates. The audio launch will take place March 9 and I will soon confirm the release date as well," she said.

It is jointly produced by Eros International and Mediaone Global Entertainment.

Kangana Ranaut tried to mock Deepika, Sara and Shraddha for ...
33 minutes ago