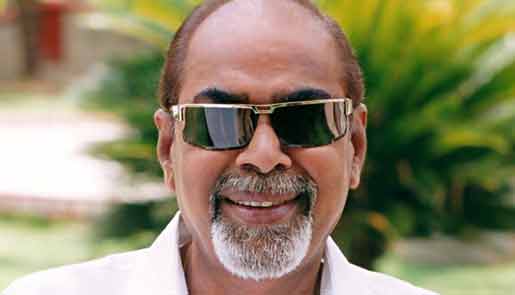 Coming from an agricultural family, he went on to become one of Indian cinema's most loved and respected producers -- Daggubati Ramanaidu's film journey, which lasted for five glorious decades, can inspire many generations to come.

Fondly referred to as a movie mogul, Ramanaidu lost his battle to prostate cancer and breathed his last here Wednesday. He was 79.

Ramanaidu, who was never a bright student in school, dropped out of college and joined his father's rice mill and bus transport business at a very young age in his birthplace Karamchedu.

His first stint with the cinema world was through a production agency called Shambu Films. He forced his father to invest in this company and subsequently got himself familiarised with the production process.

It was during this time, he befriended Telugu industry stalwarts such as Akkineni Nageswara Rao (ANR), S.V Ranga Rao and Gummadi.

Interestingly, Ramanaidu entered the filmdom as an actor by landing a brief role in 1959 Telugu drama "Nammina Bantu", starring ANR.

Shambu Films didn't make any project for the next few years and Ramanaidu got employed in the tobacco industry. But his heart was in cinema.

In 1962, he shifted base to Chennai (then Madras) and worked briefly in a company that manufactured bricks.

Towards the end of the year, his close relative Bhaskar Rao floated a production company called Anuroopa. Ramanaidu seized the opportunity and joined it.

In 1963, under the company's banner, he produced his first Telugu film "Anuragam", which was a colossal flop. The company didn't let Ramanaidu produce more films.

He then went on to setup Suresh Productions, named after his eldest son Suresh Babu, and produced 1964 Telugu hit "Ramudu Bheemudu".

Under the banner, he went on to produce over 120 films across 13 Indian languages in a career spanning over five decades.

Ramanaidu backed family dramas and mythological films in the first decade of his career as a producer. Gradually, by late 1970s and early 1980s, he started producing commercial potboilers with stars such as Shobhan Babu, Krishnam Raju, Chiranjeevi and his second son Venkatesh.

The veteran maintained some ethics in his work and produced content mostly suitable for family audiences.

Some of his other popular Telugu films include "Prem Nagar", "Jeevana Tarangalu", "Soggadu", "Kaliyuga Pandavulu", "Coolie No 1" and "Ganesh".

Initially, most of his Telugu films were dubbed in Tamil and a few were remade as well. Then he also ventured into other languages.

He never found producing films in other languages a barrier.

"Films are visual treats and creativity has its own language for effective communication," he had told IANS in an interview.

He had also produced films in Tamil, Kannada, Malayalam, Oriya, Punjabi and English.

As a producer, he gave break to 11 heroines and 20 directors and innumerable number of character artists and comedians.

He was instrumental in setting up Ramanaidu Studios, Colour Lab and Cine Village.

A strong believer in the philosophy of giving back to the society, he built Ramanaidu Charitable Trust and donated 10 acres of land to build an old age home in Narsapur mandal in Medak district, and earmarked five acres of land to an orphanage.

Besides a few Nandi and Filmfare awards, Ramanaidu was conferred the Dada Saheb Phalke and Padma Bhushan awards in 2009 and 2012 respectively.

Ramanaidu always wished to wield the megaphone, and it happened to be his last unfulfilled wish.

In 2013, he told IANS: "My dream is to direct someday. That is something I haven't done before and I'm planning to start it next year".

Perhaps, it wasn't meant to be.