View Profile
Whether it is a Bollywood star owning an IPL team, a cricketer and an actor appearing together for an advertisement, an alleged affair between a cricketer and an actress, or a model promising to bare all if her team wins, cricket and Bollywood have always shared an amusing relationship. This trend has now taken shape in an interesting way, as the endless line of fangirls who've lost their hearts to young players now includes famous babes from B-Town.

Not long ago, we heard Shahrukh Khan teasing Harbhajan Singh by asking him "Tera ghar kab 'basra' hai?" (when are you settling down?), hinting, in no modest words, at the buzz of a blossoming relationship between the spinner and actress Geeta Basra. Then, there's the heavily hyped affair between Yuvraj Singh and Kim Sharma. It seems like each day brings with itself news of a new overlap between the world of India's most beloved sport and its illustrious film industry. Some of the most news-making Bolly-cricket romances of the recent past include Yuvraj Singh and Amisha Patel, Yuvraj Singh - Deepika Padukone, Virat Kohli - Genelia D'souza, Mahendra Singh Dhoni - Deepika Padukone, and Mahendra Singh Dhoni - Asin Thottumkal amongst many others. 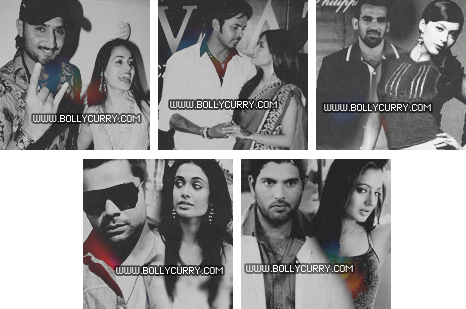 The latest to join the league are young sensation Virat Kohli and newbie Sarah Jane Dias; the duo have been spotted together at numerous parties and we have even heard that when they are not together, they are constantly on the phone with one another!

Another alleged couple who have been denying such rumors are India's dancing cricketer S.Sreesanth and Riya Sen. Reportedly, the two came close while shooting for a jewelery commercial a year back. Talk of their wedding is in the air, while they themselves have thus far clung to the cliched 'just good friends'. However, there is plenty of evidence to affirm the rumors. Most notably, Riya was spotted cheering Sreesanth's Kochi Tuskers during a clash against Kolkota early in IPL 2011, even though the opponent was her home team.
Taking these romance rumors several steps further is the news of India's head Bowler Zaheer Khan and Isha Sherwani's marriage! Word of their tying the knot has been making rounds around B-town soon after Zaheer emerged as the highest wicket taker in the ICC Cricket World Cup Tournament 2011.

With such an epic list of love stories between India's two loves - cricket and Bollywood, it's likely we won't wait long before at least one of them inspires an adaption for the big screen! Which of these pairs would you like to see immortalized in a biopic?