View Profile
Sumedha Karmahe needs no introduction. This "Barbie Doll of Chhattisgarh" as she is popularly known as, has captured the heart of millions of music lovers with her mesmerizing voice and angelic looks. The sweet shy beautiful and talented find of C-2007 series of Zee SaReGaMaPa who enthralled viewers time and again had made it to the top 5 before getting eliminated. Post C-2007 and after a successful World Tour, Sumedha is back to making music. 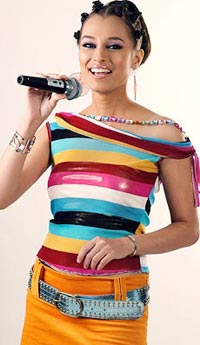 Featured Video
After the World Tour she is overwhelmed with the response she has got. On asking she replies enthusiastically, "We started our tour from West Indies and the crowd was just awesome. We never expected such a big welcome. Then we toured many cities in US too. It was the same everywhere. I was overwhelmed with the amount of love these people showered on us all". According to her, life has changed a lot after C-2007. "Today I go out on street and everyone knows me. I always wanted to be here at Mumbai and be a playback singer and today that dream has come true. I was saved from the struggle that I may have had to do because of SaReGaMaPa. We are already known faces. Struggle is still there because I am a newcomer, but it's not the same as any other unknown face. From my side, I would say the whole credit goes to SaReGaMaPa," says the shy, yet confident girl.


From her comments it seems her singing career not only looks promising but seems it has taken off with a bang! She has already recorded few songs. She has sung for Bappi Lahiri in the film "Tere Sang" and for Satish Kaushik too. Apart from that, she has sung a duet with Raja for a big banner film titled "Chandni Chawk to China". Not just Hindi films, but Sumedha has also recorded a duet with Aneek for a Bengali movie. That's not all, she has also sung for Govinda's film titled Lover's.
What about acting? Would she be interested if she got an offer? "No I have no plans to go into acting. I want to stick to singing itself and make this my career. Becoming a playback singer was something, I always wanted to do," came her candid reply.

So what is down the pipeline? Does she have any specific plans for future? She responds that she hasn't chalked out anything specific for long time future. "I'll take decisions according to whatever options come my way," she said.

Sumedha has been really busy. She spent the whole month of February doing stage shows and the recording of a Bhojpuri song was in the schedule too. She may not have long term plans, but she is surely headed the right way. We wish this delicate yet determined Barbie doll all the very best and hope to get treated to some beautiful chart toppers from her in the day to come.

13 years ago Wow. It's great to see she's busy with songs.
Good luck to her and wishing all the best in the future.
To MY dear little barbie doll :]

13 years ago she is a beautiful human being,a versatile singer,n a gr barbie doll, i just hope she gets all wat she wants .all the best sumedha AKA barbie doll

She was one of the most versatile singer. The other one being Amanat. Best was the humility she showed. And nice to see she is still the same.

Wish her the best. Hope we get to hear lot of chart toppers from her sweet voice.

+ 5
13 years ago Thnaku..
I know she is not interested in going to bollyood.
coz she knows i am also busy.. if i get time and stelp in boly the nshe may come :D

13 years ago Sumedha has a bright future and I wish her the best of luck!

13 years ago Sumedha is awesomeee, I love her! Best of luck to her with everything, she rocks :)

+ 2
13 years ago west indies! YEAHHH!! woooo hahaha i called her so much times and bothered her while she was in trinidad...and she was very sweet with me every time..even invited me over many many times to come hang out with them at the hotel! LOL!! all the best to her