View Profile
And back we are with the feature article for Couple of the Week.
This quiet duo is known for their welfare commitments and all the humanitarian efforts they propel to promote open lifestyles with lesser rigid norms. The couple compliment each other, in their occupations the one being a celebrated actress and the other a phenomenal lyricist and former scriptwriter; and in the rest of their lives as such easily becoming one of the most graceful and awe-inspiring couple among their contemporaries.
We talk of none other than Javed Akhtar and Shabana Azmi.
Being a famous lyricist, poet and scriptwriter for Hindi cinema, Javed Akhtar has managed to live up to the history of writing in his family, a history which hails from the past seven generations, his maternal uncle and grandfather both having been famous for their Urdu poetry.
Having completed his studies at Colvin Taluqdars College and later at Aligarh Muslim University, Akhtar began his career as a scriptwriter and dialog writer for the lesser films. It 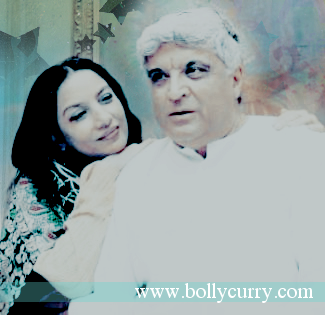 didn't take much time however, for his talent to be identified and he consequently became scriptwriting partners with Salim Khan (f/o Salman Khan).

Over the years, he went on to do (individually and in joint ventures) big projects including Andaz, Sholay, Seeta Aur Geeta, and Don. His lyrics, a development of the more recent couple decades have done more than fair justice to the reputation he earned during his years of scriptwriting. With fourteen Filmfare Awards in his kitty (seven each for scriptwriting and song lyrics respectively), national honors of Padma Shri (1999) and Padma Bhushan (2007) to his credit, Akhtar saheb has indeed been a pinnacle of success in whatever vocation he has chosen for himself over the years, since his advent to the city of dreams in 1964.
His better half, Shabana Azmi managed to make a very big name for herself. Not just for her professional work, but for promoting several social welfare organizations and events. In fact, she has now long served as a leading social activist in the country. A lot of this acclamation came from her fight for social awareness of AIDS. The actress is never afraid to voice an honest opinion on any issues that might  be worth fighting for.
The well known actress graduated from St. Xavier's College in Mumbai and obtained a degree in Psychology. Alongside, she did at that point a course in acting from the Film and Television Institute of India.
Azmi started out her movie career with Shyam Benegal's Ankur, and the legendary actress has since added to her shelf of accolades five National awards, four Filmfares, national honors including Padma Shri and Rajiv Gandhi awards among several others, and international recognition at North Korean, Chicago and other film festivals. Her social activism too has earned her an international reputation for being a great human apart from a celebrated artist. The top honors in this latter field of work have included Gandhi International Peace Award, the Crystal Award from World Economic Forum and an Honorary Doctorate from University Brandon Foster in Yorkshire.
Coming to the married life of this couple featuring on our hot seat (after enlisting only a part of their endless list of achievements), before marrying Shabana Azmi, Javed Akhtar had been married to Honey Irani, with whom he has a son and daughter (Farhan and Zoya Akhtar). After their divorce, he met Shabana Azmi and eventually, the two tied knot on 9th December, 1984.
The couple has stuck together through all that has come their way ever since. Along with being a happy and complementing couple, the two have never ceased to be perfect guides and wonderful parents to Javed's two children of his first marriage, with both Farhan and Zoya sharing a warm bonding with their step mother Shabana.

The four have on several social occasions been witnessed as a happy cordial family, with an open environment that encourages all four of them to be there for each other at all points.
14 Likes

Ranveer is Fulfilling his Husband Duties towards Deepika? ...
25 seconds ago