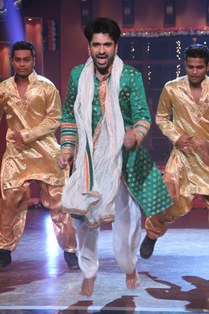 Freedom the birthright of every human being, was brought in style with a strong dose of vigor and grandeur on the sets of Comedy Nights With Kapil. The Independence Day special on Comedy Nights with Kapil witnessed the whole cast religiously present for the shoot to show their dedication towards their country. In addition to the cast, popular television stars also attended the special show to add on to the magnificence.

The two-hour special episode will see artistes such as Karan Wahi, Karishma Tanna, Rashmi Desai, Sophie Choudry, Vishal Singh, Akshat Singh, Eijaz Khan and Shakti Mohan representing aesthetic portrayal of India's various states as they perform some spectacular acts. The artistes made were not only increased the entertainment quotient of Comedy Nights with Kapil but also were successful in beautifully depicting the emotion of patriotism.

Speaking about Independence Day special, Sunil Grover, who made a comeback as his widely loved character Gutthi said "On this Independence Day, we are bringing the spirit of freedom to the show. The excitement, the colours and the costumes on this special Jashn-E-Azaadi episode represent the tricolors of the flag. We are celebrating the hard-earned independence under one roof as free-spirited Indians."

Kiku Sharda, who essays the popular Palak, commented saying, "Comedy Nights With Kapil is the most free-spirited. While we celebrate every shoot with just as much enthusiasm, today is so much more special since it highlights everything we represent and stand for which is the thought of a free soul blended with that of a free mind."

A special twist to the Independence Day special is that Comedy Nights With Kapil will grace all TV screens not only on Saturday and Sunday, but Friday, August 15th too!

6 years ago u did a superb marathi famous lavani style u look pretty and gorgeous... love u shakti mohan

6 years ago Shakti Mohan is awesome in whatever dance forms she does!!!!

6 years ago U r so special Gurmeet Choudhary... U r my sweetheart. Keep enthralling us.

You rock any dance style!!!