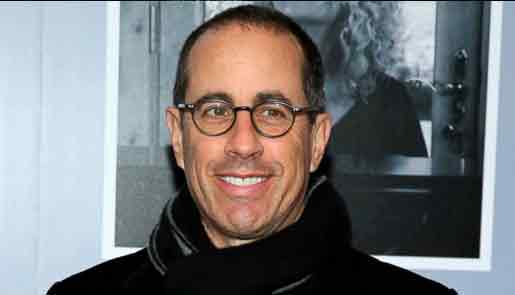 Emmy and Golden Globe-winning stand-up comedian Jerry Seinfeld is set to tickle the Indian audiences' funny bone for the first time with a performance as part of Stage42 festival. He says it's an "honour".

"I have always been fascinated by India and its culture. I have great respect for its people and their way of life. It is a great honour for me to be invited," Seinfeld said in a statement.

Indian fans of the entertainer will have a long-awaited opportunity to experience his comedy live at the Sardar Vallabhai Patel Stadium here March 14 and March 15. The show's tickets, which have a starting price tag of a grand Rs.7,500, will go on sale Friday, and will be available for purchase on www.insider.in.

Seinfeld, whose comedy career took off after his first appearance on "The Tonight Show with Johnny Carson" in 1981 and who is the man behind comedy series "Seinfeld", is joining the line-up of the already underway festival.

Organisers of the fest are happy to have Seinfeld on board.

"For many of us, our introduction to comedy was Seinfeld. He's a comedian whose influence is impossible to understate, and it's a matter of immense pride that we will be bringing this global icon to India for the first time," Arjun Ravi, co-founder, NH7.in, said in a statement.

The Stage42 festival will take place in seven cities -- Bengaluru, Chennai, Delhi, Hyderabad, Kolkata, Mumbai and Pune -- between February and March. It aims at showcasing some of India's and the world's most celebrated artists and experiences in comedy, music, theatre and food. Another star performer who's due to perform is Russell Peters.