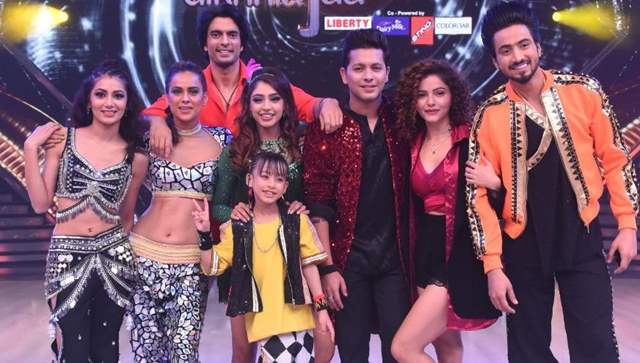 This weekend, gear up for double entertainment bonanza as Drishyam 2 casts Ajay Devgn and Tabu grace the set of COLORS' ‘Jhalak Dikhhla Jaa 10’. Promising the high-octane entertainment, breath-taking fire acts, heart-warming contemporary forms and a lot more contestants will be seen dedicating  their performances to the 90’s era! Among all the amazing acts to look forward to one that stands out is of Sriti Jha. She will be seen using a prop that will be lit on fire. Watching her stupendous act, judges Madhuri Dixit Nene, Nora Fatehi, and Terence Lewis (guest judge) were left awestruck and complimented her for being a star performer earning standing ovations from everyone. Terence Lewis, the maestro of dance remarks, "This style is hard to learn in three to four days, and your handling of the prop was flawless."

Gunjan and Tejas raise the roof by dancing to a hip-hop fusion of the Humma song. Nishant Bhat will be seen performing to ‘Mujhko Ranaji Maaf Karna’ in a saree. No one will be able to take their eyes off him as he stuns the audiences and judges with amazing detailing and expression that he showcases throughout the act. With her signature whistle, Madhuri will be seen applauding Nishant's performance and confronts that the performance reminds her of the Marathi "thaska”. To keep the fun going Rubina and Terence's squads will be seen competing to test whose team knows Hindi better. Judges made up the Terence squad, while all the competitors were on Rubina’s team. Watch the outcome of this Hindi test in this weekend’s episode.

As is the norm, on this weekend too the judges compete against one another for the title of best judge of the week. The challenge for the competition was to dance to a song from the 90s, but there was a twist. The rhythm of the song would speed up and slow down at any time during the song, so they had to keep up with the beats. Guess who wins the best judge competition. Will there be a new winner, or will Madhuri Dixit Nene win for the sixth time in a row?

With the trepidation of elimination, Gashmeer Mahajani said, "If this is my last time on stage, I want to fulfill my dream of performing and sharing the stage with Madhuri Dixit." Making his dream come true, Madhuri Dixit will be seen acting out a romantic scene from her film with him. Amid all the cheer, judges Nora and Terence turn up the heat with their impeccable moves to the iconic song ‘Janam, I Love You. With the entertainment quotient scaling up each week, the fear of elimination prevails among the contestants, and it is only superseded by the excitement of the finale. Stay tuned to know who makes it to the final dance-off.

+ 12
2 months ago Bring back Amruta, her elimination is unfair.