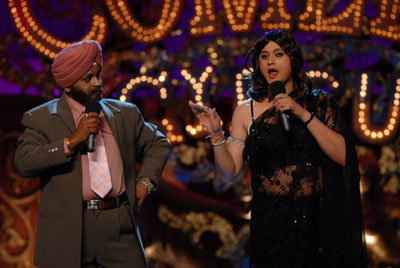 This week, Saturday September 1, Comedy Circus will have Swapnil as Madira Bedi (Liquor in English), he does a take on actor Mandira Bedi (she was to be part of the show but dropped out last minute) and his stand up comedian partner VIP is 'New Joke Singh Buddhu' (Navjot Singh Siddhu). Their act digs at Navjot Siddhu's continuous and infectious laughter (even if it's not funny), Mandira Bedi's sarees, cricket and her famous noodle straps (actually hakka noodles according to them).

Celebrity guest Preethi Jhangiani was completely in splits, she said "This act was one of the finest mimicries I have seen, as an actor I know it's tough for a man to play woman and I must say Swapnil played it effortlessly. Their jokes were topical with good detailing of the characters portrayed. I love the Mandira's hakka noodle strap joke!"

Watch out for Swapnil Joshi –VIP and Ali Asgar –Kashif Khan battle it out in the semi-finals of Comedy Circus this September 1 at 9.30 p.m. only on Sony Entertainment Television. 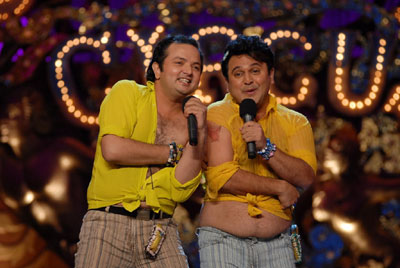 This is in continuation of their act in Episode # 10. Ali plays 'Honi' - Sohni's son and Kashif plays 'Anhoni' - Moni's son. Ali and Kashif plays 'Gays' in this laugh riot (they have been constantly teased on thier chemistry in the show, so much so that Archana has actually told Kashif that he is a threat to Ali Asgar's wife).

Preethi Jhangiani could'nt control her laughter, she loved the act, she commented on the accesseries that the jodi' was wearing and the baba's hanging on to them....Stand up comedian Surendra Sharma said that they should continue thier act..as they would make more money this way...

Watch the Episode on Saturday, Sept 1 at 9.30 on Sony Entertainement Television.

All the best to both for the semifinals...

+ 2
14 years ago OMG! It's Hilarious both Ali & Kashif r luking so funny...& Swapnil very pretty as Mandira...Thankx for the Article