On the outset of the launch, we caught up exclusively with both the maestros and grilled them on this show. Here is what they have to say: 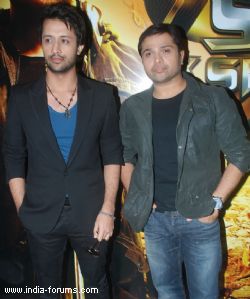 What made you to take up this show?
Himesh: I have taken this show for Boney Kapoor and Gajendra Singh with whom I have done a few shows earlier and of course for the channel. Apart from these factors, I liked the concept of the show which is interesting. It is something new and working with Atif is also new for me. The entire making is very happening for me.
Atif: I never wanted to do a scripted show and I always wanted to be part of reality television. The makers of the show have promised me that the show is no way scripted and just that one reason compelled me to do it. Even if its 20 to 25% is scripted its fine and I can bear that, but not beyond that. I also wanted to spread our culture and show how the Pakistani youngsters perform.

Atif why did you choose Sahara One as your launching channel when there are shows on popular GECs?
Atif: If the channel is not doing well, you can't leave the channel and if the people are still watching it, they will work for the betterment of the channel.

Was this the only show that was offered to you?
Atif: No, there were nearly five to six shows that were offered to me, but I thought they were never my ball game. My ball game is,if I am in the creative aspect of this programme I will see to it that there is contemporary music coming in.

What is the concept of the show?
Himesh: The concept is all about contestants competing with each other. I will select the contestants from India and Atif will be choosing from Pakistan and there will be a competition between these contestants. The competition will be on the international level, the shooting will be in Dubai. Let's see who wins the competition, it's as simple as that.

If it has to be a competition between two countries, then why India and Pakistan?
Himesh: Well, I really have no idea; I think the channel and the production could give a more perfect answer. Apart from that it's just the format of the show and nothing else.

Do you think the show can intensify the rivalry between the two countries?
Atif: Not at all because for us its friendship and peace.

What do you personally think of the concept of an India-Pakistan singing competition?
Himesh: My emotion is the same wherein the show will be mainly to find good music and the fight would be only to find a good singer. Where the contestants will actually compete and not me and Atif. The audience will get to see a perfect blend of music through this show. Contestants can come from any country to win the competition. It's purely the competition of music and nothing else.
Atif: I want them to spread more peace and love, apart from what they have to do.

How will you judge the show?
Himesh: My advice will be to be a master of one rather than trying on being versatile because versatility will not give you work but the peculiarity or the X factor in you will. It will force the composer to select between you and the two lack singers. I will advise this to my contestants.

Will you try to bring in Pakistani music as well, apart from Bollywood numbers?
Atif: Why not, I would love to and that's the whole origin and point of the programme. All these years, people have appreciated Pakistani singers a lot and I want them to come up on a bigger platform and have a look at what we have.

Have you started shooting for the show and how is your experience with each other so far?
Himesh: I have just done a couple of promos with him and we will soon move to Dubai for our shoot. And talking about Atif, he is a good singer and quite famous. He is loved by everyone and I really hope to have a good journey with him.
Atif: I just met him a couple of days ago and he is fine. It is not rivalry or battle it is all about Dosti.

What quality would you see in the contestants?
Himesh: I would definitely seek for the X factor that is different from the conventional singers because the conventional singers are doing so well. The legends and the other singers from other reality shows are also doing well so far. So the only thing which will make these singers different would be the X factor and the uniqueness in their voice texture.
Atif: I will express what I feel wherein I see the whole package. For me apart from Sur, which is the foremost aspect for such show, presentation and the audience interaction are also equally important.

Who is your favourite singer?
Himesh: Of yesteryears, I love Kishore Kumar and now I like Sonu Niigam and Rahat Fateh Ali Khan.
Atif: There are loads of them. Kishore Ji, Sonu Ji, I like all of them

Are you open for more reality show after this?
Atif: Depends, I am not in a rush but I am not going to repeat the same kind of shows

Wistfulness 8 years ago All the best Himesh! You are and will be the best forever. No one can give 30 hits in an year like you did.
Jai Mata Di!

.dream-catcher. 8 years ago As i m an Indian i would ne with Indian team but with judges i would be with Atif!!! Atif is way better than himesh hv u ever heard himesh singing!! Eww frm his nose LOL btw its just my opinion wish best of luck to both of the teams and hope it would be a fair compeditions sloved with Love

mona1997 8 years ago I love u Atif I cant wait till ur show launches n not being mean but I don't like himesh tht much they cOuld have chossen someone better for india!!

brainychild92 8 years ago i LOVE atif!!!! himesh, not so much but he does have his days.. or in this case songs... well, good luck to both and i hope there will be no discrimination!

Aizatmir 8 years ago I just lv ur voice atif n lv to hear all ur songs.although i m n indian bt u r my fav singer n my fav celeb's too.

'Naagin 5' To Welcome Two New Entries in The Form of Karan ...
20 minutes ago