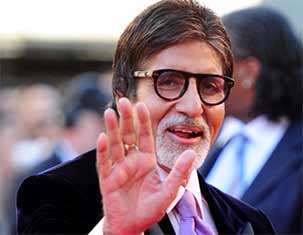 Extolling the contributions of Bengali literature and cinema to the world, Amitabh Bachchan said here Sunday that cinema plays an important role in unifying and integrating in a "fast disintegrating world".

Speaking in Bengali, Amitabh Bachchan conveyed to the audience - during the inauguration of the 19th Kolkata International Film Festival - the nostalgia he felt in returning to Kolkata.

In impeccable English, he narrated the journey of Bengali cinema and highlighted its contributions to Indian cinema in his baritone, to a bewitched, packed house at the Netaji Indoor Stadium here.

"Cinema to me, apart from being a great medium of entertainment has always played the role of unifier and integrator. When we sit inside a darkened hall to see a film, we never ask the caste, the creed, the colour and religion of the person sitting next to us. Yet, we enjoy the same film, we laugh at the same jokes, we cry at the same emotions and we sing the same songs," he said.

"There are very few institutions left in this fast disintegrating world that can boast of such an integration and such an atmosphere (which cinema provides)."

Lapsing into Bengali occasionally during his 20-minute-long opening speech, Bachchan took the audience through landmark events in the history of Bengali cinema so much so that even West Bengal Chief Minister Mamata Banerjee conceded there was nothing more left to say on this aspect.

Bachchan also highlighted the importance of writers for being instrumental in inspiring cinematic brilliance.

"The inspiration to most works of cinema has to me been the contribution made by the written word. Writers therefore, hold in my very limited opinion, key to a finished and credible product."

Screened across 13 venues in the city, the gala affair will witness around 3,000 delegates and 24 international guests. It will show 189 films from 63 countries over eight days.