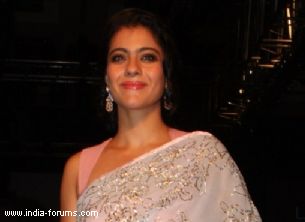 Actress Kajol Wednesday attended a special session at the 15th edition of FICCI Frames 2014 and said it's unfair to say that one gets influenced by watching cinema.

The star of films like "Dushman" and "Dilwale Dulhania Le Jayenge", was speaking on the ideas behind censorship guidelines.

"My kids are in front of the computer 24X7 despite having all the parental control. There is no way to stop the flow of information. The flow of information is too fast and too much. If you say one gets influenced watching a character, I think it's foolish. Cinema reflects society, society rarely reflects cinema," Kajol said.

She added: "Movie shows whatever happens in the society. For instance, if a hero smokes on the screen, it is because 90 percent of the country smokes and not the other way round. It's stupid to say one gets influenced by watching on the screen."

The session was organised in partnership with LA India Film Council.

Mishra spoke about the "No Smoking" disclaimer issue faced by the filmmakers and said: "Our only request is, do not put 'No Smoking' disclaimer on the frame. Put it before or after the scene because you are taking away that moment from the filmmaker."

Kajol said if a director has shot that particular scene, then with such disclaimer "you are cutting down the creativity of the director".

Rakesh responded to their complaint saying right now he cannot comment upon it as the matter is "sub-judice in the court".

However, when Kajol asked can one change the guidelines of the Censor Board, Sippy said: "We can try and bring changes in guidelines".

Naagin 5: Veer to return to destroy Bani and Jay?
4 minutes ago

Jaya Saha to be Arrested by the NCB Soon: Report
45 minutes ago