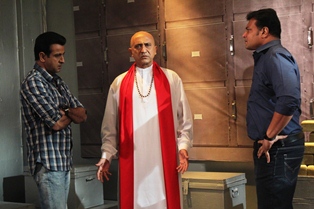 Viewers are in for a treat as Sony Entertainment Television brings a double bonanza for all the CID and Adalat fans. This Saturday, KD and the CID cops will come together in a 3 hour special movie CID - Adaalat Karmyuddh to solve a mysterious murder case!

Atmanand, a Mahaguru of an Ashram is involved with many international criminals in a scandal. Crime journalist Meghna, daughter of ACP Pradyuman's friend, goes to the ashram to find out the truth, however she is mysteriously murdered! Atmanand is accused of killing her but KD decides to defend him as he believes he is innocent, against CID's wish. Investigation reveals the Mahaguru has lookalikes in the ashram and he has been threatened before. It is revealed that one of his lookalikes Kiran was the actual murderer and his disciple Sarvesh is arrested as the mastermind behind the entire ploy.

On the other hand, CID team gets mysterious calls from Meghna's phone and their doubt about the Mahaguru get stronger.  Mahaguru calls KD and while they were in a vault Daya comes in too but a gas leak leaves everyone unconscious leading to the Mahaguru's murder with murder weapon in KD's hand. As KD is accused, CID team however does not believe that he can murder somebody for money. On further investigation, the gun dealer is caught and Daya's name is revealed leading to his arrest. In a turn of events, everyone is shocked when Daya accepts to all the charges on him. Understanding that something is definitely wrong, KD and the CID team come together to catch the real culprit. The investigation leads to KD and Abhijeet getting trapped and fighting for their life.

Who is the culprit and why is he after the CID team and KD? Will KD and Abhijeet get away unscathed? What is the mastermind's plan?

nonu8 6 years ago Karamyudh...what a Superb episode, loved it.

+ 4
9 years ago I Love Preity,have been missing her on screen for a long while. Come back soon PZ! You are one outstanding personality that set you apart from other actressed,quick,witty,sexy and smart ;) HB To you :D

9 years ago I absolutely adore her and have been her fan as far as I can remember. I am so glad she is doing this movie this year. I really miss her on the big screen, her talent is getting wasted on actresses like Katrina...so sad!!! Preity you are the most gorgeous and I LOVE YOUUU!!!!!!

+ 5
9 years ago I love Preity! I've been her fan for as long as I can remember, and I'm dying to see her back on screen! I really hope her next movie is a good one, cause I really wanna see her in a good movie, something along the lines of Kal Ho Na Ho or Salaam Namaste! All the best Preity, and a very Happy Birthday to you in advance!

+ 3
9 years ago I absolutely love her,... though she isnt perfect i love her personality ... being a fan , aware of all these ,

She is beautiful, intelligent and a great actress!!!!