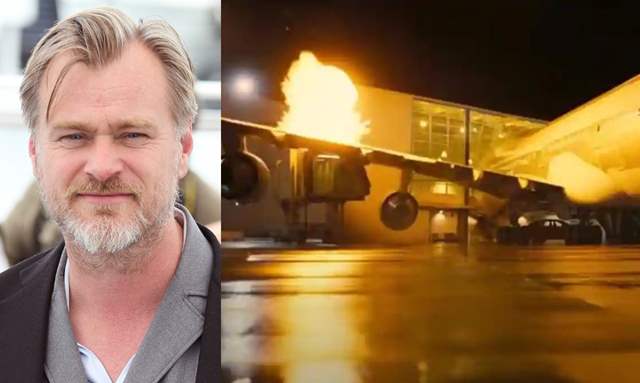 Christopher Nolan has a knack of going overboard to bring aesthetic value for his films. Generally, Nolan’s style of cinema is considered to be a visual treat for his fans and how could one not expect the same with his upcoming film Tenant.

He has always managed to surprise his fans with huge, mind-boggling ideas to bring reality to a scene. Remember, the hallway scene from Inception or the scenes from Interstellar?

Now, actor John David Washington has said that the plane crash glimpsed at the end of the recently released trailer for Tenet was shot for real.

The science-fiction spy film, directed by Christopher Nolan, continues the filmmaker’s devotion to shooting on film and capturing action in-camera instead of via visual effects.

In an interaction with Cinemablend, Washington said that the crew cheered when Nolan captured the shot.

That was a real plane, and that was a real building that they crashed that plane into. And we, cast and crew, all witnessed it. It was epic! It was incredible, we all cheered and hurrayed and hurrahed when they yelled cut after Chris felt like he got it. What you saw is really what happened – at least the night I was there.

The shot was from the end of the second trailer for the film which was released earlier this week.

John David Washington, the son of actor Denzel Washington reacted to the trailer and said, “Really, it’s interesting, because there are just little nuggets of information and just breadcrumbs of information about the movie that I was surprised [Nolan] was going to reveal. And I love that he did.”

This Christopher Nolan directorial also stars Kenneth Branagh, Michael Caine, Dimple Kapadia, and others. The film has partially been shot in Mumbai and will be released in cinemas soon.

Christopher Nolan's 'Tenet' Is The Hope To Get Audiences Back To ...

Vikas Sethi all set to launch a production house with wife; ...
14 minutes ago

Breaking
Breaking Karan Patel Eliminated from Khatron Ke Khiladi Made in ...
15 minutes ago

Arshad Warsi Prays for Sanjay Dutt after he was diagnosed ...
22 minutes ago

Sanjay Dutt’s Lung Cancer is on Stage 4; Heartbreaking ...
59 minutes ago

Ali Asgar and Vishal Kotian to team up after 22 years for ...
2 hours ago