In the galore of the Bollywood glitterati, there are also the shining innocent souls of child artists. These young achievers hold their place in the industry by being genuine and thorough learners. Today BollyCurry brings to you one such little master, Harsh Mayar, our Child Star in the Spotlight, who has struck gold with his ability to enchant his viewers.

Bornon 22nd March, 1998, Mayar was not overly passionate about acting to begin with, but he did enjoy the stage. Coming from a humble background, Mayar was 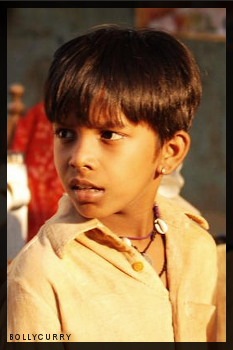 roped in the Shri Raam Center for Performing Arts, New Delhi by his uncle. Mayar dedicated himself to theatre at the young age of eight and did a number of stage shows. Amidst this, he also gave as many as 180 auditions for singing, dancing and acting. His first touch with Bollywood came with Chillar Party (2011). Although he did not match the ideal character, Mayar got the role but had to back out when he broke his right hand while playing.

It was those 180 auditions which brought the ticket of fame for him in the end. After the broken hand healed, Mayar got the call for an audition for I Am Kalam (2011), whose makers were impressed by his previous tapes. Though he did not show much interest, Mayar's parents convinced him to give it a shot. And you can either call it luck or his parents' blessings, but Mayar was selected for the film. I Am Kalam dealt with a poor Rajasthani boy, named Chhotu. Born in the slums, he was inspired by the life of the former President of India, A.P.J. Abdul Kalam and wanted to make prove the saying "destiny overpowers hard work" wrong.  Chhotu's struggle is shown with well-crafted situations and Mayar played a convincing role of a poor boy trying to live a big dream.

Mayar's portrayal won him many praises, including the prestigious 58th National Film Award for the Best Child Artist. The movie itself won many international and national accolades and was also screened at the 63rd Cannes Film Festival.

Harsh Mayar has since done some noteworthy works, including Jalpari: The Desert Mermaid (2012), Chaarfutiya Chhokare (2014) and an English film named Desires of the Heart (2013). The young actor has a remarkable screen presence and wants to explore more meaty stories than joining the commercial money making business. Now, at the age of seventeen, Mayar is juggling his theatre career with his studies and believes in hard work, like his films teach.


The dedication of a young mind is boundless and makes the viewer enchanted by the sheer expressiveness of this young talent. Harsh Mayar has proved that he has the ability to make you sit up and take notice of his doings. We hope he continues to be as endearing as he has been till now. Here's wishing him a wonderful and satisfying career ahead. BollyCurry, on this note, takes your leave. Until next time, let us know what you think of this young charmer in the comment box below.
Writer: Nabila S.
Editor(s): Mohini N. and Gunia K.
Graphics: Marsh P.
Have a suggestion or comment for BollyCurry? Drop us a PM at BC_Dropbox Today!

Krishna Mukherjee to join Harsh Rajput in Balaji's next?