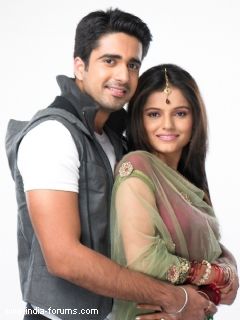 Chhoti Bahu - Sawar Ke Rang Rachi has been on air for more than a year and there was a lot speculation regarding its running on television. Rumors were afloat of it being shifted to 6:30pm slot but now it is reported that it will breathe its last on 18th May.

The slot will not be left vacant as it going to be replaced by the new show 'Sapne Suhane Ladakpan Ke'. The new show is a comedy show about two girls who hail from starkly opposite cities of India.

gwynn24 8 years ago I really liked the show but hated the Srishty Rode track... not only did she ruin CB for me but she also ruined the pure image of Radha

erlynda 8 years ago Why the sudden ending ? It's so unfair. I will miss Avina a lot.Hope to see them in another beautiful drama soon not necessarily on the same tv channel.

chotibahoo 8 years ago Avinash and Rubina, Will miss you both a lot. Best of luck and may your future be bright and shining always. Keep each other happy!!

Smiley-786 8 years ago Avinash and Rubina are best jodi .. Love them lot will miss them

rekha-rubina 8 years ago I am really going to miss avinash and rubina lot .i hope u both come back soon

-Anarkali. 8 years ago Why does choti bahu have to end so soon...,It has only been one year and couple mths since this show have return to television...and now it will be finish..,

I will miss Avinash & Rubina... As a mateter of fact I will miss everyone and evrything about choti babu...

...Olefie... 8 years ago Will miss Avinash and Rubina badly… The chemistry between them,attracted me sooo much and from that day till now,i love them sooo much…. Please come back through any other new show and we will be there to support u…. I cant explain my sadness Avina,u r tooo gud,u people just stolen our hearts…… may god bless u abundantly with gud health and wealth….. All the very best for ur future :-)….
With lot's of love-Jeffin :-)

oldamma 8 years ago Will greatly miss Avinash and Rubina very very very much. Do not know whether they can come again together in a new serial. Never in my life have I felt so attached to a couple and that too in a Hindi serial (have never like any of the hindi serial before). Avinash and Rubina are truly a "magical" and "unique" couple. This type of couple only exist in once or twice in your lifetime ...