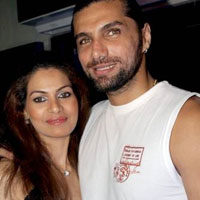 Star Plus’ Nach Baliye 4 has been full of surprises and to intensify the audiences’ interest even further, Farah Khan announced last week that there will be a celebrity Wild Card Jodi entering the contest in the next episode.

According to our source, “The Jodis who were contemplated upon were Shabbir Ahluwalia-Panchi Bora, Karan Singh Grover-Shraddha Nigam, Chetan Hansraj-Lavinia and Ali Merchant-Sara Khan”.

“Shraddha is doing a movie, so they could not accept it. Shabbir and Panchi were strong contenders, but they too did not approve of it. And now, Chetan Hansraj and his wife Lavinia have got the green signal. They will be in as Wild Card Jodi when the next episode is shot”, informs our source.

However, Chetan had a different tale to say when we called him. “I have not been approached by the channel”, said the actor. When probed further, whether he will take it up if offered, the actor denied stating “My schedule is very hectic, so there is no space for another show”.

Well, this has now become a ‘trademark’ reply for Nach Baliye contestants, as we have gone thro’ this earlier, before the 12 Jodis were announced!!

14 years ago I heard last month that they were being questioned about being a couple..but didn''t really know that they really were one.....wow..they make a very cute couple...I''ve loved Shabbir since Kahin to Hoga

14 years ago I still have a doubt... Are there going to be 2 wild card entires this time or just one?

+ 2
14 years ago i dint know panchi and shabir were a couple?! i would''ve wished for karan and shradha to enter and TAKE OVER THE COMPETITION!!!! :D

+ 7
14 years ago Clarification from Telly Buzz,

According to our sources, Lavinia is fit and fine to enter Nach Baliye.

realityshows!! 14 years ago I never knew Shabbir & Panchi were couple