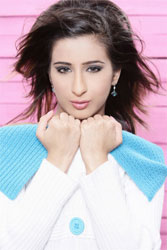 Telly Buzz has already reported about Swastik Pictures and Vivek Bahl's  upcoming show Navya on Star Plus and the finalized cast of it with the main leads. The show gets its next addition to the cast.

Cheshta Bhagat who has done shows like Pyaar Ka Bandhan and who was lastly in Imagine TV's Kitani Mohabbat Hai - 2 as Arohi's cousin, will  be seen in Navya with a grey shade.

She will play the character of Sonia, who studies in the same college with Navya (Soumya Seth) and Anand (Saheer Sheikh).

A source informs "Chestha plays the character Sonia, a girl of today who is bossy in nature with a lot of attitude. Sonia is very much in love with Anand, who is in love with Navya."

"Sonia dislikes Navya for her being one of the middle class ones and always asks Anand not to talk to her", our source adds.

We contacted Chestha and she confirms "Yes, I am doing the show and the character is very interesting."

Speaking more about on the character Chesta says "Sonia is today's girl, bossy in nature with lots of attitude as she knows she is the most beautiful girl in the college."

Navya will be replacing the show Tere Liye, and will be on air from 4 April on Star Plus.

+ 5
9 years ago Tere Liye was , is and will always be the best! No show can take its place!

+ 4
9 years ago all the best!!!!!hope u r the most flop show ever so that sp ppl will realise what a big mistake dey did by stopping tl!

9 years ago For some reason, I cant imagine Cookie or Coffee as a negative character... they were so silly in the show! LOL! But wish her all the luck... hope she is really successful in this show! (:

+ 3
9 years ago KMH proves to be a good launching pad to many new actors.
good luck to her.