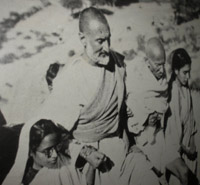 Bollywood has seen many films based on Gandhi, but there were many other freedom fighters apart from him. Such fighters have hardly find place in our films. As trend is changing, many untouched subjects are getting impetus.

‘Chenab Gandhi’ is Sanjay Leela Bhansali’s next production. His assistant Vibhu Puri who has earlier assisted Bhansali on Saawariya will direct this film.
This film is known to be inspired by the story of Khan Abdul Gaffar Khan, India’s freedom fighter who was known as ‘Frontier Gandhi’.
The film stars Harman Baweja, Vidhya Balan and Amitabh Bachchan in lead roles.
What you think about it?
Featured Video