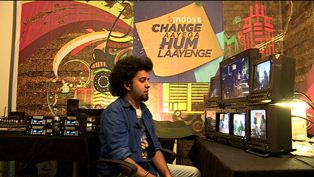 Change Aayega, Hum Laayenge which has always taken up issues in the society to awaken the youth, will address the issue of racial discrimination this week.In a country like India which is known for its variety of spiritual and cultural practices, where people are never tired of talking about 'unity in diversity', cases of racism are a big shame. Through clever satire and real time experiment, the show will bring to fore the reaction of the youth to this matter.

The satire revolves around Bhed Bhuvan Singh, a restaurant owner, who suffers losses in business because of his racist behavior towards customers.A ray of hope knocks at his door when he learns about a food critic, Tenzing Dorjee, visiting the city. Assuming that the critic is a Chinese food lover, the restaurateur revives Indian cuisine with Chinese in order to receive good reviews and make up for his losses. As per his plan, when Tenzing Dorjee arrives, Bhed Bhuvan Singh serves him food without asking for his taste and preferences. The critic gets annoyed and furious after seeing such discriminatory attitude towards him and threatens Bhed Singh of writing a bad review about his restaurant. The restaurant's north eastern waiter and cook,who were always treated badly by Bhed Singh, come to his rescue by cooking an authentic Indian dish for the food critic. He feels guilty of his biased attitude towards people and realizes his mistake.

In the concluding part of the episode, the show conducts a social experiment at a renowned restaurant where two north eastern customers are being hassled by some of the other patrons. The crux of the experiment is to see if the unsuspecting guests at the restaurant stand up against the discriminatory attitude towards the innocent customers or be mere spectators.

pinkmermaid 9 years ago she is not so good looking.but maybe there is something about her that grabs attention...best of luck!

9 years ago She looks amazin!nt too thin and not fat at all.just perfect!I hate hate lolipop grls!there's too much of them!and she is here to stay!she has potential!

9 years ago She definitely looks better here than in the previous cover we saw. But I feel like the pose it making her look a bit wide. Loving the leapord print though (especially the shoes)!

preetyangle123 9 years ago she is not fit to be on the cover to be honest...buh i like her make up,
i HATE her dress .eww

+ 3
9 years ago i don't really like the dress or the look for some reason.

+ 2
9 years ago She's pretty, but for some reason not liking this, I guess it's the pose, and maybe her expressions cause she's trying to make it seductive I guess, but it's not coming out that way.

9 years ago She is a nice looking girl... but I think she is one movie prodigy... Got famous because of Salman... I am not sure I will call her a star material. If she wasn't Shatrughan Sinha's daughter nobody would even look at her let alone give her a break or putting her on a magazine cover! I think she is being given too much of footage.. Sorry! But that's the hard truth...

Like I said, she looks nice and carries herself well but I am not going to go gaga over her...