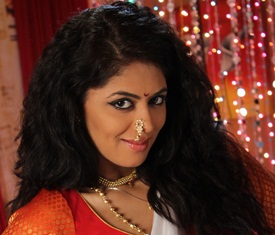 Chandramukhi Chautala is an adept police officer who is known for fighting crime and solving cases in her own unique ways.

Kavita Kaushik who plays the lead as Chandramukhi has always stated that she has a liking for Marathi Culture and particularly the mannerisms and cuisine associated with it. Incidentally, Kavita has got an opportunity to be a Maharashtrian in an upcoming track of F.I.R wherein she will be seen as 'Gangubai' in a traditional nine yard saree.

Kavita was really excited for this part & did extensive research by watching Marathi movies to understand the finer nuances.

Kavita Kaushik said, "As Chandramukhi, I am used to playing the Dabang type police officer and being a crude person, with this new role the game changed entirely as I had to be a demure soft spoken lady. The contrast was very striking between Gangubai & Chandramukhi. I spoke with my friends from the Marathi theater industry to get tips about this part. I am really happy that I will be playing the role of Gangubai on F.I.R. It'll be fun to play the part that I am so endeared to. "

Watch Chandramukhi Chautala solve criminal cases with a flavor of humor on F.I.R only on SAB TV!

+ 2
10 years ago wow I cant wait to hear his voice again :D
the other song was a favorite of mine :D
I'm really excited :D

+ 4
10 years ago Wow! Thats great! I loved his Bluffmaster song. Hope this ones a hit too. He suits this kinda stuff. He's a pro at being Mr Cool Dude :D

+ 6
10 years ago I really loved Right Here Right Now. I'm sure this one will be good as well.

10 years ago serious? they dont even wat rap means and they are out here rappin..lameos..

10 years ago what? he raps?! Seriously?!?! Never knew that. Not too good of an actor...dont wanna hear how well he attempt to rap.

10 years ago i loved his rap in right here right now! good luckk wit this one

+ 2
10 years ago :D
He sings well enuff!!!
And is an awesome actor...the only point is he hasn't got any offer which will explore through him!