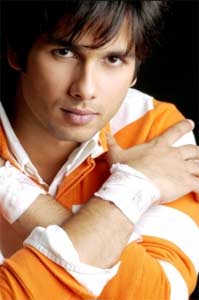 Shahid Kapoor says he loved being part of 'Chance Pe Dance', but feels that the title of the film is 'cheesy'.

'We were looking for a title for the film for a very long time. There was this one title we wanted, which was 'Yahoo', but because the rights lie with yahoo.com we couldn't really get that.

'So, one day I got a message from Ken (Ghosh) asking how is 'Chance Pe Dance'? I said cheesy but we really don't have an option so let's go ahead with it. However, I've loved being a part of the film and I've enjoyed the process thoroughly,' Shahid told reporters here.

The actor, who was in the Capital with co-star Genelia D'Souza and director Ken Ghosh to support the 'Chance Pe Dance' collaboration with Fanta, launched a special edition bottle to promote the film.

Talking about the importance of promoting a film in the present times, Shahid told IANS: 'All kinds of films are made and its very important to promote them correctly and make the audiences understand what they are coming to watch.'

'Obviously, the product that you are making and its quality is important but on the other hand, how you market it and what perception you create is something that also needs attention,' he added.

Releasing Jan 15, 'Chance Pe Dance' revolves around a talented young struggling actor Sameer (Shahid). Juggling with various jobs while waiting to get his big break in movies, he meets meets a choreographer, Tina (Genelia D'Souza). And what happens after that is what the film all about.