'Chance Pe Dance' is not a biopic on Shahid Kapoor, clarifies director Ken Ghosh even though it does reflect the actor's real life struggle. 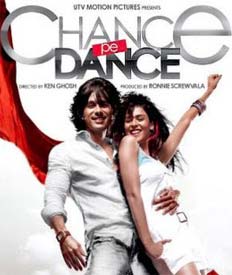 Featured Video
the idea to make the film came, Shahid's real life struggle was at the back of the mind. He is one of the very few actors who actually struggled to make it where he is. He didn't have any godfather to launch him,' said Ghosh, who gave Shahid his first break with his directorial venture 'Ishq Vishk' (2003).

Releasing Jan 15, 'Chance Pe Dance' revolves around a talented young struggling actor Sameer (Shahid). Positive and brimming with energy, Sameer juggles various jobs while waiting to get his big break in movies. During his struggle, he meets a choreographer, Tina (Genelia D'Souza).

'Normally, you write a script and then approach an actor. But in this case ('Chance Pe Dance') the actor was already there for whom we were writing the script. Shahid was the obvious choice because he could identify with the character as he has experienced such odds in his real life too,' Ghosh said.

Asked if it was a biopic on Shahid, he said: 'It's not a biopic in any way. The experiences have been borrowed from the life of strugglers. Shahid has gone through similar situations (shown in the film) while he was struggling.

'The film is about those who go through a lot of struggle just to get one chance. Sometimes life gives you a chance, you need to grab it and make most of it.'

Initially, Ghosh had signed Jiah Khan to play the lead opposite Shahid, but later she was replaced with Genelia when the script was changed after 45 minutes of the film was shot.

'When we first wrote the script, it was a non-romantic film. But after shooting for nearly about 45 minutes of the film, we realised that we need a romantic angle in the film. We had to change the script, so there was some change in the female lead's character and for that we had to replace her (Jiah) with Genelia,' said Ghosh.

Asked if he had to re-shoot from the very beginning, he said: 'I re-shot only 20 minutes of it.'

Ghosh, who started working on 'Chance Pe Dance' five years after his last film 'Fida' (2004), says he was not sitting idle all through that period.

'I was working on scripts and different ideas. I was also doing some commercials. Writing a script takes a long time. It takes almost a year.

'The script is ready for my next film. Neil Nitin Mukesh will play the lead role in that film,' he said.