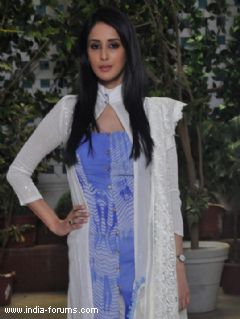 Ardent followers of Zee TV's Qubool Hai are up for a lot of excitement with the recent comeback of the  venomous Tanveer (Amrapalli Gupta). The mastermind has begun to create quite a stir in the lives of the show's protagonists once again and is all set to spring one surprise after another. In another surprise for the viewers, the lovely Chahatt Khanna has been roped in to play a prominent character called Nida.

She enters as Aahil's (Karanvir Bohra) childhood friend, an upmarket arrogant girl who looks down on middle-class people. Nida's character has lot of spunk to stand her own in front of the evil Tanveer. Her presence will surely add a lot of  spice and will be instrumental in changing the equation between Sanam (Surbhi Jyoti) & Aahil. As the story progresses, viewers will realize that even Nida has an agenda of her own and once her real intentions come to the fore, viewers are in for a rollercoaster ride of twists and turns...!

In an interesting track, the will of the Nawab reads that all his property and wealth will be inherited by Aahil but the clause states that he will only inherit it if he is married before he turns 30. As Aahil is due to turn 30 in some time, a furious Tanveer makes up her mind that she will find someone who Aahil can marry to fulfill the clause and that is when Aahil's childhood friend Nida enters in the picture. The ever-so-evil Tanveer is up for more plotting and scheming as she manipulates Aahil into asking for Nida's hand in marriage!

Back on the small screen after a gap of more than a year post her marriage, the gorgeous actress shares her excitement "I am really excited to be a part of the much loved show Qubool Hai which enjoys a huge fan following across all age groups. After my break, I wanted to choose something different in the fiction space as an actor and when I was approached for the role of Nida, I agreed doing it instantly. Even though she has shades of grey, there are so many layers to my character which will surprise the audience and keep them guessing what Nida will do next! With Nida & Tanveer in the house, viewers will see a lot more intriguing drama unfold in the show. I am sure Nida's antics will keep the audience glued to their television screens, as she is an unpredictable character and nobody knows what is going on in her mind!  It will be interesting to watch what lies ahead in Sanam, Aahil & Nida's lives!"

Will Aahil comply to his Ammi wishes and ask for Nida's hand in marriage? Will Tanveer succeed in getting Nida & Aahil married for her own benefit?

nikki.171 6 years ago Is she Tanveer Part 2 !?? GOD no!
But welcome Chahat.
Karanvir Bohra and Surbhi Jyoti rockk as Sahil! Qubool Hai rocks!

surbhisha 6 years ago Surbhi Jyoti is best i am here to comment for u Qubool hai Rocks ;Karanveer is doing awesome job as ahil & Sahil Rocks.

Gayu-Sahil 6 years ago karanvirbohra and surbhi jyoti rocks as sahil...