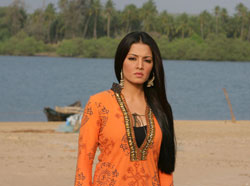 
Turns out that her character in the film is christened Mira Nair - she essays the role of a sizzling South-Indian to whom Ajay Devgan's character is attracted on a yacht!


Laughs Celina, "It's only my character name in Golmaal Returns and has absolutely nothing to do with Mira Nair, the filmmaker. On another note, I'd love to work with Mira! She's stunning and eloquent, and a marvelous film-maker!"


Golmaal Returns is out in cinemas worldwide on Wednesday 29th October. It is an Indian Films - Studio 18 release.