BollyCurry brings back a popular column for its readers: Stars Then and Now, an article featuring those who started off their acting career as a child artist! This time, BollyCurry brings to you one such popular child actor who won everyone's hearts as a child, and then returned to the silver screen with a bang! Yes, we're talking about none other than the popular actor Aftab Shivdasani. 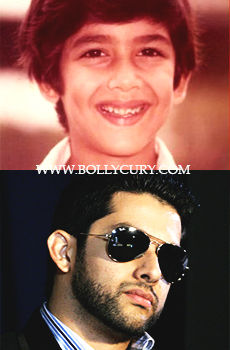 Shivdasani was born to a Parsi mother and a Hindu Sindhi father in 1978, and at the tender age of 14 months, he was signed up for a baby food commercial. As he grew older, he continued to do advertisements, and bagged the role of one of the orphans in the blockbuster film Mr India (1987). He went on to appear as a child actor in numerous popular films such as Shahenshah (1988), Chaalbaaz (1989), and Awwal Number(1990), where his performances were always appreciated.
While Shivdasani took a break from acting to focus on his academics, he continued to appear in commercials, where he was spotted by ace director Ram Gopal Verma, who signed him on for his debut film, Mast (1999). The film was an instant hit, and Shivdasani's performance was lauded by the critics. He then appeared in the 2001 film Kasoor opposite Lisa Ray, where his performance as the antagonist of the film was hailed by the critics. He then went on to appear in a string of unsuccessful films such as Koi Mere Dil Se Pooche(2002), Kya Yehi Pyaar Hai (2002), Pyaasa (2002), Shukriya: Till Death Do Us Part (2004), etc, which greatly hampered his career graph. However, in the middle of all these flops, he appeared in multi-starrer comic capers such as Awara Paagal Deewana (2002) and Masti(2004), which did well at the box office.
Shivdasani was last seen in the horror film 1920: Evil Returns (2012) and the hit sequel toMasti - Grand Masti (2013), both of which greatly helped in boosting his failing career. In the coming year, he will be seen in a few films including Dost, Master Plan and the next installment of the Dhamaal franchise - Total Dhamaal.
Did You Know?
As BollyCurry wraps up this article, here's hoping that 2014 is a good year for Shivdasani, and his upcoming films do as well as his recent outings. All the very best Aftab!
Do you have a suggestion or comment for BollyCurry? Drop us a PM at BC_Dropbox today!
Author: Ritchelle C.
Editor/s: Pooja B. & Gunia M.
Graphics: Saraa K.
8 Likes

Asmita Sood was pranked by Aftab Shivdasani during Poison 2 shooting, ...