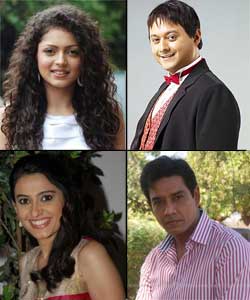 We too hear that Ali Asgar was also approached for the event, but due to his date issues, he could not attend the event.

These celebrities are shooting for the episode today.

We contacted Drashti Dhami and she confirmed the news, "Yes, I will be performing on Om shanti Om and will be making my presence at Apoorva's inauguration party of the hotel."

When contacted, Swapnil Joshi too confirmed the news.

We could not get through to Smita Bansal and Anoop Soni for their confirmation.

Watch this space to know more on the same…

"I instantly wanted to be a part of it": Annup Sonii on reuniting with ...

+ 2
7 years ago Drashti Dhami You are real Jaan of JDJ for me
I am loving every act which you have performed with Salman!!!
Best Jodi in JDJ6!!

+ 2
7 years ago Drashti Dhami you are perfect
combo of beauty and brain.
God Bless You Angel...

7 years ago Hiii Drashti Dhami
You are a queen of expressions
Love You a lot...!!!

8 years ago drashti you are the best. i love you my sweet princess. please come back on screen. your all fans are waiting for your grand come back. god bless you.