Gracing the limelight of the current edition of the popular Celebrity in the Spotlight series is a man who is no stranger to us, Sushant Singh Rajput. Bollywood has always welcomed fresh faces and new talents, and the small-screen success Rajput was no exception! Debuting with Abhishek Kapoor's Kai Po Che! (2013), the handsome actor has climbing the ladder of success quite quickly and has proved himself time and again. 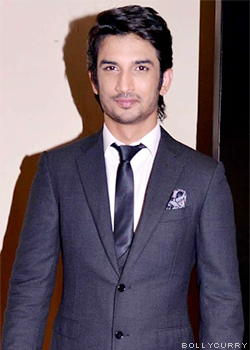 After garnering a passion for acting and theatre, Rajput dropped out of the Delhi College of Engineering partway through his degree.  Like many of his contemporaries, Rajput began his acting career in Tellywood, a medium that seems to have even more of a reach than Bollywood these days. Whilst performing in one of his many plays, he was discovered by the Balaji Telefilms' casting team and was asked to audition for a role in the popular show Kis Desh Mein Hai Meraa Dil. With his tremendous acting talents and good looks, he was later offered a lead role in the long running series Pavitra Rishta, a role Rajput played to perfection. As a result, the show catapulted Rajput's career to a whole new level and he received awards and accolades consistently for three years. These awards include those of Best Actor, Most Popular Actor, Most Popular Face, Best Television actor and Best Jodi with Ankita Lokhande in numerous different award platforms.
Rajput then stepped into the world of Bollywood in 2013, after he bagged one of three lead roles in the remake of Chetan Bhagat's The 3 Mistakes of My Life. With an astounding fan base, great talent and a spontaneous personality, Rajput marked his place in Bollywood with his debut itself, managing to win over both critics and audiences alike. He received two awards for Best Male Debut that year for his performance as Ishaan Bhatt. Soon after, he grabbed the lead role in Shuddh Desi Romance (2013), a modern day love story, opposite the beautiful Parineeti Chopra and talented Vaani Kapoor. Bringing his unprejudiced perspective and keeping his aptitude intact, Rajput managed to rock the critics' boats once again.
Sushant Singh Rajput's next venture is P.K., where he is cast alongside popular faces like Aamir Khan, Anushka Sharma and Boman Irani. The film is expected to be released in December 2014 and deemed a comedy-drama family film. He will also be seen playing the title role in an upcoming detective movie, Detective Byomkesh Bakshi, which is slated to release in early 2015. BollyCurry wishes Rajput a bright future with him reaching his pinnacle of success, as he continues to brighten up our television screens.
Did You Know?
Author: Mohini N.
Editors: Pooja B. and Gunia K.
Graphics: Shikha A.
Do you have a suggestion or comment for BollyCurry? Drop us a PM at BC_Dropbox today!
15 Likes