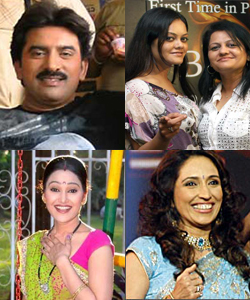 Zee TV's Sanskaar Laxmi is gearing up for a week long festivity which will be a lead up to Laxmi's (Veebha Anand) Big Fat Gujju wedding!! The pre-ritual ceremonies will start airing from February 21st, and will go on till 25th.

The production house we hear will be roping in some big celebrities for the wedding.

Our source states, "Producer and Writer Raju Bhai has roped in the very popular actor Hiten Kumar to be part of Laxmi's wedding. The scenario will be similar to the sequence in the movie Ajab Prem Ki Gazab Kahaani wherein Ranbir Kapoor tells Katrina Kaif that he knows the famous Bollywood star Salman Khan. It so happens that Hiten Kumar comes to the village for a shoot, and this is when Laxmi expresses that fact that she is a big fan of his. Sooraj (Rohit Purohit) will tell Laxmi that he knows the actor, and this will give rise to some light moments".

We also hear that the musical Jodi of Avdoot Gupte and Pallavi Joshi will make a grand entry during one of the rituals and play Antakshari. There will also be a Garba function wherein the famous Garba singing Jodi, Preeti and Pinki will showcase their talent. Ketki Dave and Disha Wakani of Taarak Mehta Ka Ooltah Chashmah will also grace the Garba festivity..

Get ready to witness the Grand Gujarati wedding in Zee TV's Sanskaar Laxmi..

missy14 11 years ago Good luck to him:) lol , well the girls who screamed while looking him shirt-less were without glasses...

MysticalRealm 11 years ago GOD GIVE YOU ALL THE HAPPINESS AND THE BEST GIRL!

I-love-dmg 11 years ago I really really hope Shahid gets some happiness in his life. I have not seen the guy smile properly post his break up. I also reallly really wish a lovely girl comes into his life who will treat him ryt!!!! Love you Shahid!!!
xxxxx