This month, BollyCurry puts the chocolate boy Shahid Kapoor in the luminous spotlight of Celeb In the Spotlight.
Born on February 25, 1981, Shahid Kapoor was born to Pankaj Kapoor (actor) and Neelima Azeem (actor/classical dancer). At the age of 3, with his parents having divorced, he lived with his mother at his grandparents' house. Although he shares a friendly relationship with his father and stepmother Supriya Pathak, he chooses to keep his step-father's surname, Khattar, on his passports. Speaking of family, his lineage is filled with nothing but well-known 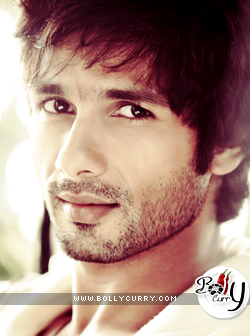 images of the past; dating all the way back to the era of Mughal Empire, even before the age of British India, is Hali, the chief protege of Ghalib, the famous Urdu poet. The list of famous previous generations also includes his great grandfather K. A. Abbas, a film director, screenwriter, novelist and jounarlist, and  his maternal grandfather Anwar Azeem, the Marxist journalist and Biharian author. There is no doubt that talent is in his blood!
Coming to his career as an actor, he too has had his share of struggles. It all began with him working for music videos and doing advertisements before he entered the film industry. He was also a background dancer in movies before being recruited for male leads. One such incident was working in Taal in the song 'Kahin Aag Lage Lag Jawe'. Post this, Kapoor decided to end his time with the Shiamak Davar Institute for the Performing Arts and solely focus on making his Bollywood debut.
Kapoor's first Bollywood debut was in Ken Ghosh's movie Ishq Vishk with Amrita Rao as his co-actress. For the same, he was acknowledged for his performance and awarded the Filmfare Award for Best Male Debut. Other films by him include Fida, 36 China Town, Jab We Met, Vivah, Kaminey, Dil Maange More, Chance Pe Dance, etc. All of the films have received mixed reviews, with it being no surprise that his best film so far has been Vivah, opposite Amrita Rao. Shahid's sweet role was accepted and much appreciated by the audience and he received many accolades from the critics as well. The film was also his first major commercial success.
Post Vivah, the box office graph of his movies has decreased. However, the experts claim his performance graph with each movie only increases. As people say, one just has to be careful with the decisions they make and the same is true here with Shahid choosing to show his versatility. Other than acting, dancing, and marking his presence in music videos and advertisements, this young lad has also anchored the 14th IIFA Awards in Macau, alongside Shah Rukh Khan.
Shahid was most recently seen in Prabhu Deva's masala entertainer R... Rajkumar, which opened to negative reviews from critics and a mediocre opening. Kapoor's upcoming project includes Vishal Bharadwaj's Haider, an adaptation of William Shakespeare's tragedy Hamlet. The movie will also star Shraddha Kapoor and Tabu, and will mark the third recreation of Shakespeare's plays that Bharadwaj has undertaken.
Did you know?
And with that we sign off, hoping that Shahid's graph in the box office raises once again and he continues to give exceptional performances.
Writer: Khushi P.
Editor(s): Gunia M.
Graphics: Shikha A.

Neelima Azeem on her broken marriages with Pankaj Kapur and Rajesh ...