BollyCurry returns once again to shine its spotlight on a talented and unconventional actor, someone who's made a mark for himself in Bollywood after a very long struggle. You got it right, it is the ruggedly handsome Randeep Hooda in our popular Celebrity in the Spotlight feature for the month of February!
Hooda was born on August 20th, 1976 to a Haryanavi Jat family. His father, Dr. Ranbir Hooda, is a surgeon and his mother, Asha Hooda, is a social worker. He has a younger brother, Sandeep, who is a software engineer in Singapore and an older sister, Anjali, who is a doctor based in Delhi. Hooda is particularly close to his sister and even attributes his interest in acting to his sister's passion for theatre. 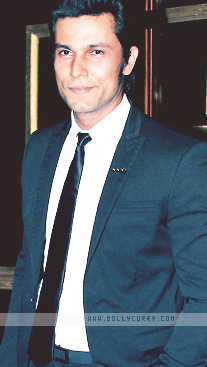 Hooda started his career as a model and amateur theatre actor in 2000. Soon after, in the year 2001, he made his Bollywood debut with Mira Nair's classic Monsoon Wedding, where he played the role of an NRI based in Australia. While the movie was a success, Hooda was overlooked and did not receive much recognition. After a long hiatus, he returned to the silver screen with Ram Gopal Varma's D (2005), where he played the lead role of a gangster loosely modeled after Dawood Ibrahim. His performance was well appreciated by critics and he was finally officially welcomed into B-town. Hooda then appeared in numerous movies between 2005 and 2009, but they were all unsuccessful and his career reached a new low.
However, Hooda's career took a turn for the better in the year 2010. He appeared in the successful Once Upon A Time In Mumbaai as ACP Angel Wilson and managed to prove his acting mettle to critics and audiences alike, even winning a Lions Gold Supporting Actor Award for this role. His next outing was in the critically acclaimed film Saheb Biwi Aur Gangster (2011) which added another feather to his cap. Since then, there has been no looking back for this tall, dark and handsome lad as he continued to appear in numerous successful films such as Jannat 2 (2012), Cocktail (2012), Jism 2 (2012), Heroine (2012), Murder 3 (2013) amongst many others.
Hooda currently has numerous movies in the pipeline. His first release for 2014 will be Imtiaz Ali's Highway with the beautiful Alia Bhatt. The romantic drama will release on February 21st and is already creating much hype with its mesmerizing soundtrack and intriguing promos. Later in the year, he will be seen in Dharma Productions' Ungli alongside Emraan Hashmi, Kangana Ranaut and Sanjay Dutt. His other projects include Vishram Sawant's Shooter, Shivam Nair's Fanne Khan, Pooja Bhatt's Bad and Sajid Nadiadwala's Kick alongside Salman Khan.
When not acting, Hooda likes to take part in plays as he considers them to be more satisfying than acting on-screen. He is also quite active in professional equestrian sports like polo, show jumping and dressage. He owns six horses and has quite a few equestrian sports medals to his credit. Hooda is also an active social activist and has worked hard to raise awareness about chronic hunger in India and anti-suicide education. He is currently single after last being known to be dating model-actress Neetu Chandra. Recently, however, there has been much speculation about his relationship with his Murder 3 co-star Aditi Rao Hydari, but nothing has been confirmed and the two have denied all such rumors.
Did you know?
Here's wishing Randeep Hooda much success for his future films, especially Highway; and here's hoping that lady love soon shines her bright light on him once again! Till then, BollyCurry bids adieu to its readers, promising to return soon with another Celebrity in the Spotlight!
Author: Gunia M.
Editor(s): Ritchelle C. and Jenifer Y.
Graphics: Shikha A.
Do you have a suggestion or comment for BollyCurry? Drop us a PM at BC_Dropbox today.