It is yet another month and we are back with a new celeb in the spotlight. Caught under the scanners of BollyCurry this month is "the most bankable star of his generation" as rightly said by the Economic Times. Yes! Ladies and Gentlemen we are talking about the heart-robber and the Rockstar, Ranbir Kapoor. 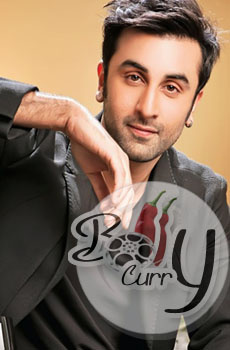 Ranbir was one of those handful blessed ones to be born with a silver spoon in mouth. Born in the influential Kapoor family to Rishi Kapoor and Neetu Singh, Ranbir was destined to become a star. The Kapoor lad started his education in Mumbai and then later joined Lee Strasberg Theatre and Film Institute in New York for further studies. It wasn't until 2005 that he joined the Bollywood Film Fraternity as an assistant director of Sanjay Leela Bhansali during Black.
He debuted in the year 2007 with the film Saawariya, also directed by Sanjay Leela Bhansali. Though the film didn't do well at the Box Office, he managed to bag the Best Debut award for the film. The 2008 romantic comedy Bachna Ae Haseeno was the first time that Ranbir got the taste of success. Since then his career graph has seen ups and downs in forms of Wake Up Sid, Ajab Prem Ki Ghazab Kahaani and Rocket Singh: Salesman of the Year.

It wasn't till 2011 that he finally won the elusive Best actor awards, and that too for two consecutive years for Rockstar and Barfi! respectively. This year the lad saw the top of the peak in Yeh Jawaani Hai Deewani, also starring Deepika Padukone, which gained its position as the fourth highest grossing film of all time. Though with the high came a low when his recent release Besharam didn't do much of any business and was tagged a flop.

Did you know?Ranbir's upcoming projects consist of Roy, Bombay Valvet with Anushka Sharma and Jagga Jasoos with Katrina Kaif. It's yet to be seen if they bring the young lad success or are a disappointment. And here we bid adieu wishing the handsome lad all the luck and success for his future lineup.