As we begin the new year, BollyCurry puts a new and immensely talented actress under the spotlight; one who's taken Bollywood by a storm. Yes, we're talking about none other than the vivacious Parineeti Chopra.

Chopra was born on the 22nd of October, 1988, to businessman Pawan Chopra and his wife Reena Chopra in 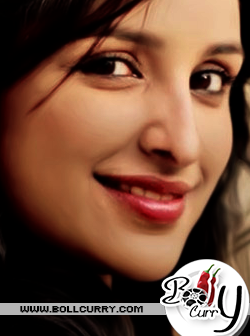 Ambala, Haryana. Her elder cousin is the extremely talented actor-singer Priyanka Chopra, and the two of them are known to share a very close relationship. Chopra completed her schooling from the Convent of Jesus and Mary in the Ambala Cantonment, and went on to pursue banking and finance in the prestigious Manchester Business School in the United Kingdom.
Chopra was never interested in the world of glitz and glamor, as she always wanted to become an investment banker. However, the economic recession in 2009 forced her to return to India, where Chopra took on a job in the Marketing department at Yash Raj Films. It was here that she was spotted by director Maneesh Sharma, who recommended her to Aditya Chopra. While he was initially reluctant to sign on someone from his Marketing department, Aditya was floored after he watched a dummy audition of hers, and soon signed her on for a 3-film deal with YRF.
Chopra debuted as a supporting actress in the film Ladies VS Ricky Bahl alongside Ranveer Singh, Anushka Sharma, Dipannita Sharma and Aditi Sharma. While the movie didn't garner favorable reviews, Chopra's performance as the spunky Dimple Chaddha was lauded by the audience and critics alike. Her next outing was in the romantic drama Ishaqzaade; while the film was a mediocre success, once again, Chopra's work was appreciated. She was then seen as Gayatri in the romantic comedy Shuddh Desi Romance alongside Sushant Singh Rajput and Vaani Kapoor, where her performance was praised by critics as well.
In a short time span of 3 years, Chopra has carved a niche for herself in the industry, and established herself as a talented and versatile actress. She has won 18 awards for her roles, including the Filmfare Award for the Best Debut [Female] for Ladies VS Ricky Bahl and the Special Mention National Award for Ishaqzaade.
Chopra's lineup for the upcoming year includes Hasee Toh Phasee alongside heartthrob Sidharth Malhotra, Kill Dill with the handsome hunks Ranveer Singh and Ali Zafar; and Daawat-E-Ishq with the rockstar Aditya Roy Kapoor.
Did You Know:
We, at BollyCurry, hope that this year is a very promising one for Parineeti Chopra; and that her forthcoming films continue to bring her accolades and win her praise from critics and audiences alike.
Author: Ritchelle C.
Editor/s: Komal P. and Gunia M.
Graphics: Preet K.