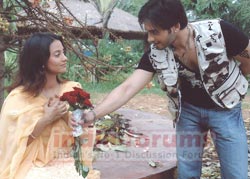 Yuvraj and Twinkle, who play onscreen lovers in the serial "Betiyaan", have been going around for quite some time now. However, what started as a tiff turned ugly when the two just couldn't stop fighting on the sets. An emotional Yuvraj got so disturbed that he tried to slash his wrists, revealed a source. Luckily, people around him stopped him at the nick of time and reprimanded him for taking such a stupid and drastic step. Now, it is still not clear whether the reason behind the attempt was the tiff with Twinkle or was it the general stress that every actor faces. We guess a psychotic test should be made mandatory at the time of casting. Not only would it save precious time on the sets, but also save the production team from dealing with desperate lovers.

blue_rose2067 15 years ago omg..wow i cant belive he was gunna do that

15 years ago woah he must b rely stressed out :s or prolly joking arnd lol

15 years ago ohh thats shocking and stupid but still wuld sumone go to such extent fr a gurl thats kinda cool in an uncool way! dunno feels kinda chweet and he must b addicted to the gurl!

Hasina7 15 years ago they have to behave as grown ups atleast on sets.

15 years ago OMG how can he think to do such a thing to him self???

He is really cute and lovely