View Profile
One of Bollywood's top actresses, Katrina Kaif, appeared on the finale episode of the popular reality s 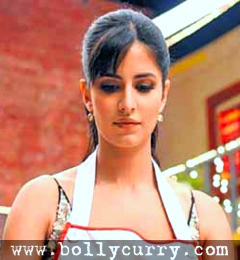 how Master Chef India and was left quite emotional.
The diva had to face rejection when the judges of the show instantly spat out her hand-made omelet. Not the one to handle rejection easily probably due to the fact that she may never have had to face it before, the sudden realization of the fact that the only thing she could make herself had been frowned upon by the judges on National television, almost left her in tears.
When asked why she acted so strongly about such a small matter, she admits that her omelet is the only thing that she can be proud about because she thinks it's pretty good and when the judges clearly disapproved of it, it made her very upset.
Katrina was extremely unhappy when she found out that the reason why her omelet wasn't appreciated by the judges was because her co-star of many movies including the recent Tees Maar Khan, Akshay Kumar who is anchoring the cooking show, had poured in a whole of cup of salt without her knowing.
Whereas Khiladi Kumar cracked up and thought it was hilarious, Katrina found it anything but funny.
It's definitely not everyday you see Miss I-am-in-control-of-my-emotions let loose!