View Profile
After toiling over cutting a niche for herself in tinsel town for many years now, in vain, it seems that Shilpa Shetty's baby sister Shamita Shetty has finally given up. 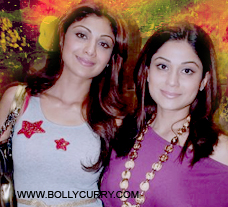 Despite all the grime and struggle, and all the side publicity from sister Shilpa's escalating graph, Shamita has not really made a mark in acting.

However, instead of being disheartened this younger Shetty sister also plans to try her luck in the Royal capital - which once upon a time had turned all cards of fate in Shilpa's favour! Buzz has it, that Shamita will make a move to London having enrolled for an interior designing program which will last six months. A good choice in good time, for the first house she could get hands on experience with could be her own sister's new birthday gifted home by hubby Raj!

Talking of Shilpa's new home, while Shamita sets off to train her hand at interiors, Shilpa is perfecting herself to be the perfect housewife. Even though Shilpa has always claimed her first love to be acting and being an onscreen entertainer, she has decided to prolong her hiatus from films. The rushed schedules which are bound to come in the wake of taking up movie offers shall, she believes, disrupt her running of her perfect home.

Here's hoping that these new beginnings for the Shetty sisters bear all fruit they wish for!