The red-haired funky ‘Remix’ girl, Priya Wal is back in action after a hiatus! The bubbly actress who was last seen in Sony’s ‘Jeete Hai Jiske Liye’ has recently entered Ekta’s Kahaani Ghar Ghar Ki, where she plays Aditi Sanghvi who comes from London looking for her mother. 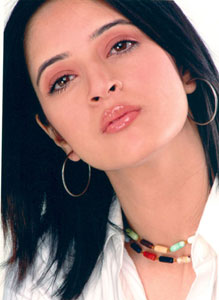 Featured Video
Talking about her role in Kahaani, Priya says, “My entry in the serial is shown when I save Om from a bomb blast and when he takes me home, I come face to face with Parvati and claim that she is my mother”. Though the actress has no clue of the future track, she says, "The girl, Aditi has all the proofs which indicate that Parvati is her mother, including family pictures of the whole family, Janki(Parvati) her mom, Doctor Parv Sanghvi, her father and her in it".

Priya who has been out of action for sometime now, feels great to be working full-fledged again. “I will not say that I was on a complete break, as I was doing episodic here and there, but yes, Kahaani is something where I am doing something really big after Remix”, quips the girl.

The actress feels honored to work with Balaji Telefilms and expresses that the joy of getting this role has not sunk into her, yet. “I have just started shooting with them. I am still trying to adjust to their hectic working schedule, yet I am enjoying it”, says the actress.

Well, going back to the Remix days, her fabulous onscreen pairing with Raj Singh Arora caught the eyes of the viewers and here, the duo is back yet again with Kahaani Ghar Ghar Ki. With Raj playing the role of Ashu in the serial, does it mean that a romantic angle will sparkle between the two here too? “It would be great to team up with Raj once more. But unfortunately, till now, we have not shot even one scene together. I really do not know what is in store for the future track”, states Priya as she signs off.

+ 2
14 years ago aaw.....she didnt look good with sharukh.....sharman is much younger therefore him and deepika are worth a watch!!
she's really pretty though

glittering eyes 14 years ago Deepika is damn Beautiful.She is a good actress too.All the best for her upcoming projects.

+ 2
14 years ago Well all of us r a lil sad that she has to do Ekta's show but then u cant ignore the fact that there is hardly anything good or diff on TV.....she waited a good 2 years for something good to come her way but all she got was disappointment.

Well I guess this show will really help her get noticed coz Ektas shows r meant to be a hit with the masses...hope this show helps her get some good work in future

+ 8
14 years ago Glad to see Priya back. She is looking simply gorgeous in KGGK. Can't wait to see Ashu-Aditi scenes.

I’ m so so so much happy that I can’t express it through any word.
I’m just at CLOUD 9 right now.

I never watched Kekta’s soap except KTH and I also loved LRL and REMIX only. But now kekta compel me to watch KGGK, by bringing Priya I mean ‘My Duh auh’ on her show.

At the same time I expect some ‘Romantic’ scenes b/w raj & priya, which I eagerly looking forward to.

I use Rajeev and Prachi desai’s name in my id cause I want to see them on-screen as well as off-screen I won’t mind but after RK I worship priya first, Prachi is second in girl wise in my opinion.

I love her so much. Last but not the least I want to say...

+ 2
14 years ago Well am so happy to see Telly buzz finally carrying an article on her....would like to thank the TB team for it

And am so glad that the Raj wala Q was popped up to her....and her reply have really got my hopes high...I soo hope ekta is reading this article n I hope she makes them a pair...they sizzled in Remix n I cant wait to see them sizzle in KGGK

And its gr8 to know that she is enjoying working with Balaji....just hope they give due respect to this talented actress n there is a lot more to her character