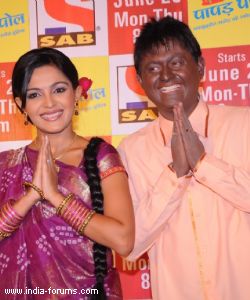 Seems like the festive time of SAB TV's Papad Pol - Shahbuddin Rathod ki Rangeen Duniya is still on as viewers will witness another round of celebrity galore in the show.

The show is coming up with a new track similar to the lines of the blockbuster movie Bombay to Goa.

A source says,"As of now, the best couple competition is over and in the coming episodes the pol people will arrange an outdoor trip. The track will be based on the lines of the movie Bombay to Goa wherein the journey is in a bus where different kinds of people come together. The Production House is approaching various celebrities for the track."

We tried contacting Swapnil Joshi, but he remained unavailable for his comments.

Though the show roped in various celebrities for their recent episodes, it has not shown a pleasant mark in the ratings list.

Hope this new track will help the show to gain more eyeballs...

shashank.sriva 9 years ago Who says it doesnt show the pleasant mark in the ratings!! Its the best serial ever!!!!

shrutireddygr8 9 years ago Very much looking forward to this track!!!