Music lovers are looking forward to the Nagesh Kukunoor film's music. While 'Rockford' and 'Hyderabad Blues' had moderately good soundtracks, the Albums of 'Iqbal' and 'Dor' earned praise. However, 'Bombay To Bangkok' has floundered. Hopefully, it is a temporary setback. 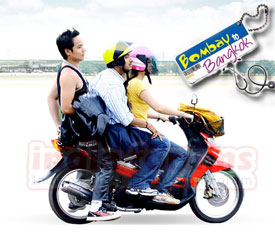 Sukhwinder Singh has composed the title track 'Bombay To Bangkok' with a folksy touch and has sung it as well, but the number doesn't live up to the expectation of a title track. The 'masala' packed number won't click.

After the lukewarm effect of the title piece, 'Dheere dheere' allows one to heave a huge sigh of relief. Zubeen Garg returns with his amazingly enthusiastic vocals that pep up the number while lyricist Mir Ali Hussein does a great job himself. If the song does well, a major chunk of the credit ought to go to newbie composers, Ronnie and Shirish.

An attempt at youthful, hip and a bit jazzy sort of music is what 'Dil ka haal sune dil wala' is about. Sonu Nigam and Sunidhi Chauhan pair up to render it, which has the typical Pritam bend, but the lifespan of this song remains doubtful.

'Same, same but different' arrives as the final track of the album. A light-hearted, partially amusing piece of composition, is composed by Salim-Suleiman. KK's rendition is, like always, really good but there's nothing to look forward to.

The assortment of music directors ranging from Salim-Suleiman, Pritam to Sukhwinder and Ronnie-Shirish didn't really serve the purpose. The album 'Bombay To Bangkok' won't stay in the racks for long.