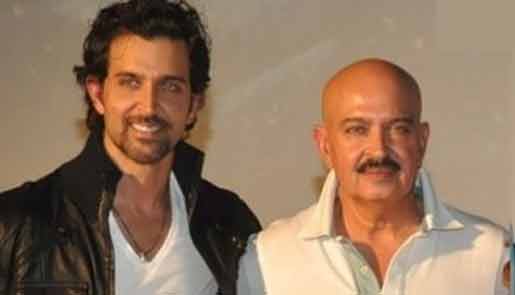 Bollywood's famous Roshan trio -- Rakesh, Rajesh and Hrithik -- were Friday felicitated for their "incredible contribution to Indian cinema" at the CII Big Picture Summit 2014. Rakesh Roshan said the Roshans will continue to be there in the film industry.

The family, including actor-filmmaker Rakesh and composer Rajesh's respective wives, were present on the occasion.

Hrithik, who has been receiving accolades galore for his flawless dance moves in the title track of his forthcoming release "Bang Bang", said the honour has given the family a lot of "happiness".

"It is very satisfying and fulfilling. Thank you so much for this," Hrithik, looking dapper in a formal suit, said at the event, which apart from a lot of media professionals, seemeed packed with fans of the screen hero.

A short video clip titled "The Roshans" took the audience on a journey across the the family's contribution to cinema. It also included works of Rakesh and Rajesh's father, the late composer Roshanlal Nagrath, popularly known as Roshan.

Snapshots from Rakesh's times as an actor, Rakesh's tunes and glimpses of the former's directorials as well as his son Hrithik's work as an actor, gave the audience a quick peek-a-boo into the film family.

The trio also participated in a discussion, talking about their camaraderie on the sets and studios; their love for each other; learning; and future career plans.

Rakesh, who has been an actor, producer and a successful director of films like the "Krrish" series and "Kaho Naa... Pyaar Hai", said the next generation of Roshans will continue their legacy -- at least that's what he has heard from his little grandsons Hrehaan and Hridaan.

"Rajesh's son is assisting me, and he is heading to films. And once I asked Hrehaan and Hridhaan, 'What do you want to become when you grow up?' They said, 'Actors!'

The kids' father Hrithik interrupted and asked, "Did they really say that?"

The proud grandfather nodded and said: "Roshans will be there."

The evening was made more beautiful with Rajesh pulling off a rare stunt on Hrithik's insistence - he sang his father's evergreen composition "Rahein na rahein hum, mehkaa karenge..."