The most controversial show on 9X, Kaun Jeetega Bollywood Ka Ticket has apparently seen its winner in Naman Shaw and Bindu. 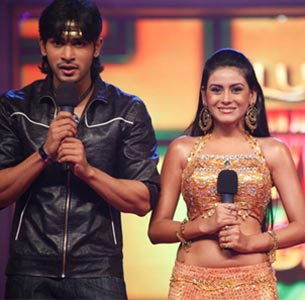 Featured Video
The big Zonal War that saw stalwarts like Shabana Azmi, Amrita Singh, Zeenat Aman and Mahesh Manjrekar as judges had Suneil Shetty as the special guest for the Finale.

We heard that Chetan Hansraj and Sanyogita were declared second runners-up while Vikas Manaktala and Deepika were the first runners-up.

The eliminated celebrities too performed for the Grand Finale and it was in fact Jay’s Mast Kalandar act that took the cake. Suneil Shetty was in praise for Jay Bhanushali and Karan Patel.

With this, Naman Shaw and Bindu seem to have grabbed the ticket to Balaji Telefilms and Popkorn Productions’ upcoming film, ‘Generation Next’.

13 years ago I really cannot wait to see another DUCK on White Feather Films. Chetan deserevd most. I am happy that cocky Vikas didn't got it. Happy For Bindu (as he is a bengali and from Bengal but that Naman is a ********** as*****

+ 2
13 years ago i am so excited only he deserves the,none other can take place,thank u so much for the information

can't wait to see the movie

13 years ago Congratz Naman
I am sooooooo happy