View Profile
Periodic films are common in Bollywood but have you ever come across a periodic song?


Of course you have, remember the song 'Phir Milenge Chalte Chalte'. Still racking your brains? Here is the answer 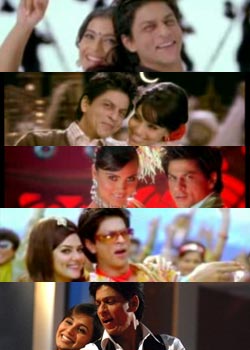 
The song served a delight to eyes as it was something new. A complete 'Bollywood Darshan' song that showed periodic reigning of the actors on silver screen.


Looking at the song one can just get an idea of the 'Bollywood era' in past but it have also got the contemporary picturesque of the film industry. Though it has not been presented in the performance the song said 'Har janam mein, rang badalkar, khwabon ke pardo pe hum khilte, hum hai rahi pyar ke, phir milenge, chalte chalte.' It simply meant with the end of one era there is beginning of another era in Bollywood.


Earlier it was them and today its Aamir Khan, Salman Khan and Shahrukh Khan and so its said


We all know that these three Khans are reigning the dream screen. But as Srk is very much part of this song so, can we say that despite of controversies intentionally or unintentionally he believes that its not only him but other two Khans too who rule the industry.