The count down has begun for SaReGaMaPa finale 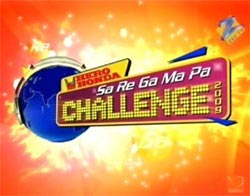 Featured Video
as the winner will be declared on January 24th... We have already mentioned that Akshay Kumar with Deepika Padukone will be gracing the finale. Alongside there will be many biggies from Bollywood as well as politicians too.

“Mithun Chakraborty, Shanker Mahadevan, Sukhvinder Singh and Ajay Devgan will also been seen in the finale. They will be performing for the event,” says our khabroo.

The show is also supporting the cause of 26/11 terror attack and thus the event is taking place at Gateway of India. “The show finale is also expecting some biggies from Politics due to the cause. Let see who all turns up,” adds the source.

The battle between the contestants Vaishali Made, Yashica Sharma and Shoumen Nandi will end tonight. So lets wait and watch who takes the winning title.

+ 3
12 years ago ye woot ii like how they are all brave enoguh to do it by the gateway of india :|

12 years ago Yashita all the way!!!
go on yashita
we love you
and youwill win