A Bolly-goer, and Telly lover?! This is just the article for you!

Playing match makers on this day of love, we at BollyCurry paired up one star each from the small and the big screen to set them up for a Dream Date this Valentines.

With much input from sincerely always, Uncle Google, and all our spy-work in digging out all the paparazzi gossip archives, we paired 5 Bollywood male stars with 5 Tellywood female starlets, and vice versa...

...and voila! The ten handpicked couples for Valentines Day Dream Date are... 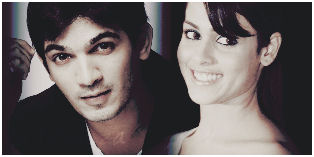 "I would love to date Genelia D'Souza. She is so cute..."

Come to think of it, he gets the lady bang on! He may have donned the serious stud avatar of Mayank for Miley Jab Hum Tum, but if the bubbly chatterbox Nupur could break the ice barriers playing his love interest onscreen, we bet the real life bubbly doze of Genelia D'Souza is just what the real life fun loving and easy going Arjun needs as his Valentine surprise! 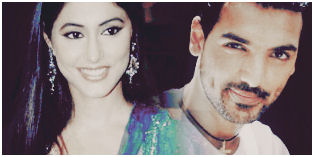 Once asked, "On a date you would like to go with...?" ... "John Abraham!" pat came the answer from the ideal and beloved telly bahu Akshara of Yeh Rishta Kya Kehlata Hai, or the real life Hina Khan.

We understand the awed stardom of this starlet here. Completely. For isn't this hunky dory dimpled heart throb of tinsel town the one who makes countless girl fans swoon everywhere!

Beneath all the macho looks, and the I'm-so-male attitude lies a simpleton, who believes in his work, his family, and his social cause. Hina, the docile-with-a-hint-of-mischief daughter in law on television, is an outgoing, fluent and trendy girl in real life. Maybe not Bipasha, but hey, she sure boasts of all the attributes that have had John hooked to Bips for years now! 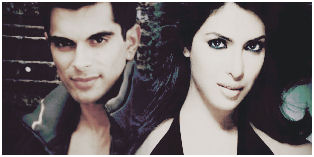 Little reason is needed to explain the presence of this particular pairing!

Playing host for the third season of Khatron Ke Khiladi 2010 (taking the baton from action man Akshay Kumar), was one among Bollywood's current day top ladies, Priyanka Chopra. And playing one of the contestants for the same season was Television's amalgamation of SRK and Salman, Karan Singh Grover!

With either of the two stars boasting of an expansive fan base, their interaction on screen for the adventure reality show just raised the ever-surmounting numbers, giving them a class of exclusive fans for the pairing as such!

In our world of dream dates then, we bring together Piggy Chops and KSG for a Valentines day out! 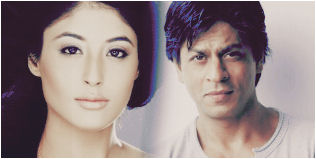 Not for beau Karan Kundra, but for Bollywood's King of romance, Shah Rukh Khan. We're certainly not putting words into her mouth, for this was her exact reaction after walking out of an encounter with the Baadshah himself, planned as a Zor Ka Jhatka for her by SBS.

Arohi, or real life Kritika Kamra, with that catchy husky edge to her ever talking voice, has left no chance to flaunt her fan-worshipping of SRK in the recent past. It seemed then, nothing short of dream come true to the popular telly girl, when she was given the chance to share a rapid fire with Shahrukh, catch on some dancing moves, and even be lauded for her TV show!

What more could she ask for? Why of course, a dream date with King Khan this Valentines! 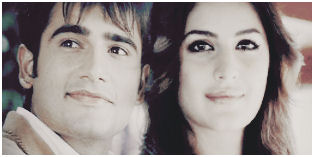 "I would not mind taking Katrina Kaif on a beautiful date..."

... is the confession right out the horse's... err, Karan Tacker's mouth! A beautiful date for the beautiful lass? Sure Karan, just the way to plan a beautiful Valentines!

Classy and trendy with such ease, and a high ranging cute-ness quotient is how one could define both these celebrities - Brit babe Kat, and chocolate boy Tacker.

Together then, they are sure to make a beautifully yummy sight! 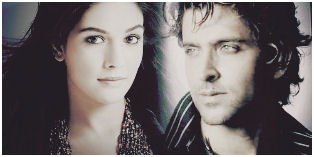 And since Pooja Gor once made a pratigya... well, more like a wish - "I wish to go on a date with Hrithik Roshan"  - we take our chance to dwell on the fantasy of pairing up this gorgeous duo for a dream date this Valentines. 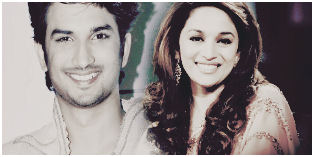 When the young actor opened up about his fandom from as long ago as his school days, making 'aww-inspiring' confessions such as having once forced his two sisters into wearing identical Nisha like sarees from the unforgettable Didi tera devar... to eliciting every possible hug out of Madhuri that he can without making a secret of his persistent star-struck-ness, and other tit bits on the stage of dancing reality show Jhalak Dikhla Jaa 4, this judge-contestant duo present a sight that is, for the lack of better words, cuteness personified!

From making her smile, to bringing tears to her eyes, Sushant with his stage acts, and little antics on and off screen, has sure won himself a soft spot in the heart of the lady with a million fans plus.

We can't help but imagine, the fun it would be then, to wait upon the table they grace, for a Valentines special candle light dinner...! 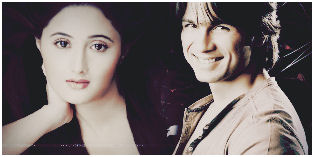 She may be all set to wed her co-star and beau Nandish, but if only God would acknowledge Rashmi's tapasya, and fulfill her long time ichcha of being granted a date with Charlie boy, Shahid Kapoor.

When asked once, who would she go on a date with, Rashmi Desai promptly second tracked darling fiance, to name Bollywood's young gun Shahid Kapoor. With those flattering dimples, beyond amazing dancing moves, and the ever prevalent air of boy-next-door to list among much else, we don't really blame Rashmi.

And in our alternate universe, where we the matchmakers get to plan who's with who this Valentines, we grant the lady her wish - and pack her off for a day with Shahid. (Not like PC is single in our charts anyways!) 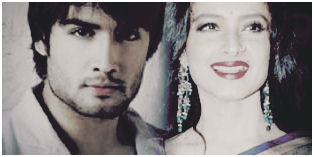 If you think this is an odd pair in the forming, refer to Vivian's response above - operative word being forever!

If ever there was true love, it knew no barriers. Age being the least, frankly speaking, more so after playing the 200 years plus vampire onscreen! Rekha isn't all that old, after all!

Besides, who are we to keep steel eyed and huskily baritone-d  Dsena from what his own heart's wishing...?

Setting up a date with his 'forever' favorite surely counts as good deed for the day, eh?! 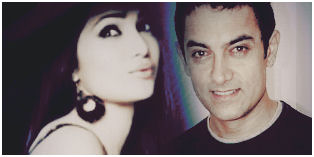 Talking of favorites, tinsel town's Mr. Perfectionist can't not be roped in!

Forget all the men in Ridhima's life and her never ending dilemmas. For the real life Shilpa Anand, declaring her devoted favoritism for Aamir Khan takes no second thoughts! And taking our cue accordingly, we sign up this duo, the fair maiden and her phenomenal knight from once upon the Coke times, for the Valentines dream date project - tattooing the date, time, venue on the currently much missed Ghajini 8-pack!

And with all those set up, we wish all you lovelies due luck to find the perfect dates for V-Day too!